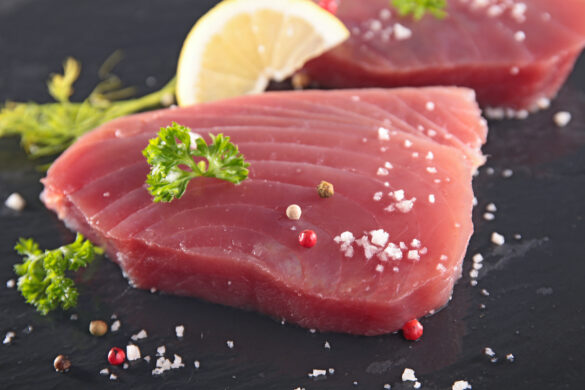 Tuna is one of the best sources of lean protein and a great-tasting, healthy option that appeals to both children and adults. A great choice for proper meals as well as healthy snacks, tuna is easy to prepare and incredibly delicious.

So, what does tuna taste like? Tuna tastes meaty and dense with a creamy melt-in-your-mouth texture. The taste leans towards sweet and saline, with the exact taste depending on the type of tuna used, its form, and how it is prepared.

Read on to find out more about this delicious fish and the taste and texture of different types of tuna such as cooked tuna, raw tuna, and canned tuna!

Tuna is a saltwater fish most popular in Asian countries. From a culinary point of view, it can certainly be hailed the king of the sea.

Meaty, delicious, versatile, and full of good fats and protein, tuna is an important part of several cuisines around the world.

There are different species of tuna including the Bluefin, Albacore, Yellowfin, and Skipjack. All these varieties taste slightly different and can be prepared in numerous ways.

Tuna is a relatively large fish, both in size and mass, and can grow up to be 6.5 feet in length and weigh around 500 pounds.

Nutrition-wise, tuna contains a host of vitamins and minerals and is a great source of protein and sodium. If you ask any health expert, they’d suggest you add tuna to your daily diet.

Enriched with a host of healthy fatty acids that contribute to heart health, tuna is a protein-rich fish that also contains a balanced content of sodium and potassium.

Tuna is a delicious fish with an oily, buttery, and flaky texture that is perfect for sandwiches, salads, wraps, and other dishes.

A perfect pairing with olive oil, citrus juice, wine, and spices, you may use it to create different recipes and enhance its naturally buttery, melt-in-your-mouth taste and texture.

Grilled tuna is soft, juicy, has a briny, meaty flavor, and bears similarities to a tender beef steak. It turns out oily and delicate if it has been grilled correctly.

Fresh tuna has a mild, delicate flavor with no strong fish taste or smell. It may, however, smell a bit like the sea. If raw tuna has a strong fishy flavor, it means that it is not fresh and must be discarded.

Fresh tuna has a dense, elastic texture and pronounced aroma due to its increased fat content and is typically sold as a fillet.

The color of tuna is the best indicator of whether or not it is fresh. If the fillet is red or dark red in color, it is fresh and safe to eat.

If it is pale in color, it means that it has been frozen and then thawed. If the fillet has a brownish tint, it is not fresh at all.

The most delicious tuna meat comes from the abdomen. It is oilier, darker, and more flavorful than the other parts.

The abdominal meat is divided into several categories depending on the location of the meat and the concentration of fat. Out of all, the fattiest part is the head region, followed by the middle portion and the tail portion.

A good indicator of the meat’s fat content is its color. The paler the color of the meat, the fattier it will be.

What Do The Different Types Of Tuna Taste Like?

As mentioned earlier, tuna comes in four main varieties: Bluefin, Albacore, Yellowfin, and Skipjack. Although they all belong to the same family, these different species of tuna taste slightly different.

Bluefin tuna is different from the other types based on its color and fat content. It has the darkest appearance and is the fattiest known tuna species consumed by humans.

Cooked Bluefin has a fresh, salty taste with a texture that turns firm and feels meaty.

For best results, it is recommended to cook it between rare to medium-rare. Overcooked Bluefin tuna will develop a chewy texture that will not be very palatable.

If you are not a fan of strong fishy taste and odor, Albacore is your go-to option. With a color profile ranging from white to light pink, this is the only tuna species that is white.

It has thick flesh and the mildest flavor out of the lot, with its texture often being compared to baked chicken breast. Additionally, it has the highest proportion of flesh against fat.

The only downside with Albacore tuna is its high mercury level, which is why you must eat it with caution.

Also known as Ahi tuna, Yellowfin tuna lies somewhere between Bluefin and Albacore tuna taste-wise. It is more flavorful than Albacore but is less fatty than Bluefin tuna.

Most often used in raw form in sushi, its reduced fat content is what gives it a bright red appearance.

Cooked Yellowfin takes on a mild, meaty flavor while its texture becomes firm and moist. Also, cooking changes its color from bright red to grayish-tan.

Most commonly used as canned tuna, Skipjack is the fishiest of them all and has the highest fat content. Unlike the other varieties, it is much smaller in size and is known for its strong taste.

If you haven’t tried tuna before, it is best if you skip this and start with the other types since it may be too much for you due to its strong flavor and high-fat content.

Canned tuna is a popular staple across the US due to its affordability, convenience, and long shelf life.

It makes a great ingredient for a variety of dishes such as pasta, casseroles, sandwiches, and of course, the ever-popular and loved tuna salad.

Canned tuna is tuna meat in its own juice, but you can find options where the meat comes in oil. Health-wise, it is better to choose the first option as most manufacturers rarely use high-quality oil.

Canned tuna tastes buttery, oily, and soft, and due to its tender texture, it is very versatile and can be incorporated into many recipes.

Although canned tuna loses quite a few of its positive qualities, it still includes omega-3 and omega-6 fatty acids that make it healthy and nutritious.

Manufacturers most often add salt as a natural preservative, but the presence of flavor enhancers and chemical preservatives makes canned tuna not the best choice.

Make sure to read the composition on the label before you purchase a can of tuna so that you know what it includes.

Tuna can be eaten both cooked and raw. In Japan, raw tuna is enjoyed in sushi and sashimi and is the perfect base for Teriyaki dishes.

Raw tuna has a fresher taste and the texture of raw and cooked tuna differ drastically. Tuna typically has a delicate flavor that isn’t too harsh or overpowering and the taste may vary depending on how the meat is prepared.

Tuna tastes quite like salmon with both having a buttery texture, while raw sushi tuna has a mild, buttery flavor with no fishy smell.

How To Cook Tuna

Tuna is a delicious fish that is incredibly popular around the world. It can be cooked in a variety of ways and can be enjoyed raw as well.

Some common ways to cook tuna include grilling, broiling, skewering, grinding up for burger patties, searing and slicing over a salad, and baking into pasta or casserole.

Other equally popular ways to enjoy tuna is to not cook it at all, such as in Japanese sushi and sashimi, South American ceviche, and Italian carpaccio.

Tuna can also be preserved by smoking or salt curing, or being canned in water or oil, as discussed above.

One thing to keep in mind when preparing tuna is that it can get dry and grainy if it is overcooked. Therefore, if you are searing or grilling it, it is best to use thick steaks and keep them slightly rare in the middle.

Now that you know all about the different types and varieties of tuna and how they taste, here are a few additional questions we thought you might have!

Fresh tuna steaks must be wrapped in plastic and kept in the refrigerator for 1-2 days. The quality, however, will keep declining and affect its taste, especially if you plan on eating it raw.

How long can canned tuna be stored?

Canned tuna has an incredibly long shelf life and, if left unopened, can be stored in a cool, dry place for 3-5 years.

Once opened, keep it in an airtight box in the refrigerator and use it within 3 days.

How long can smoked or salted tuna be stored?

Smoked or salted tuna can be stored for 6-9 months. If wrapped properly in plastic and kept in the fridge away from air, it may last even longer than that.

Up Next: Milo Vs Ovaltine – What’s The Difference?