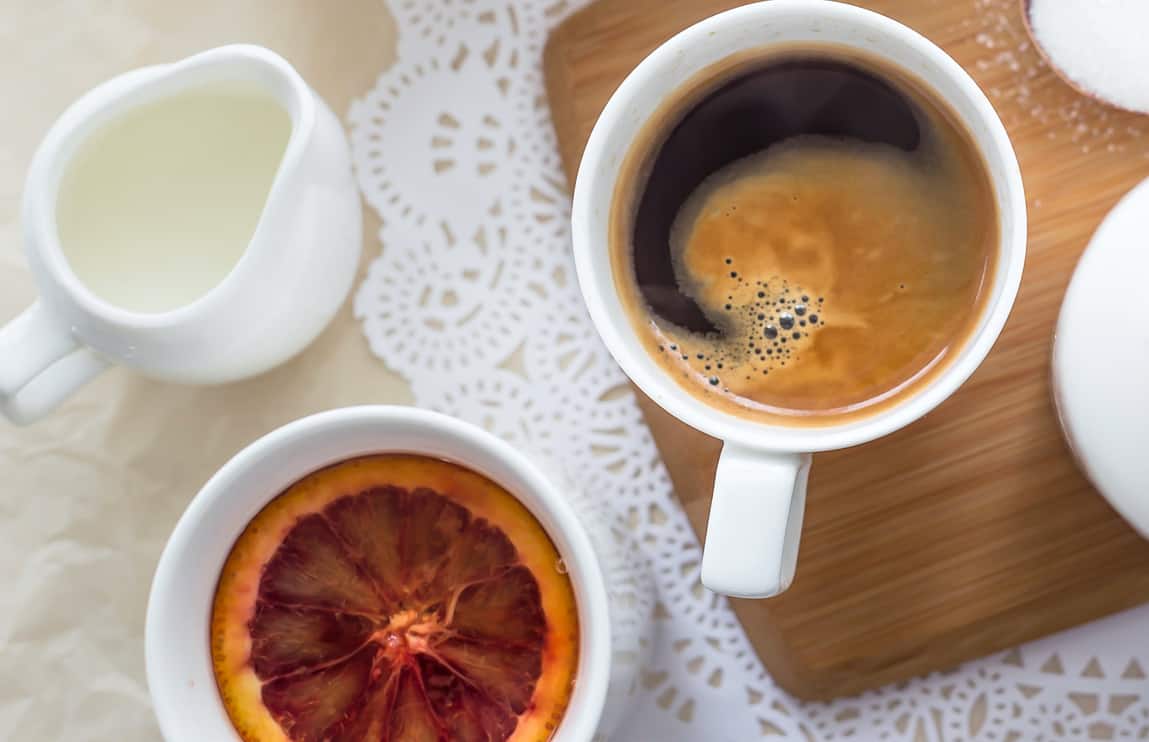 Traditionally, and even in some modern households, tea time is a sacred affair. There are rules of etiquette involved and the proper decorum must be established.

Coffee, while many revere it just as highly, doesn’t usually have the same rules or regulations. The cups you choose to serve each beverage reflect your upbringing around the subject as well as your understanding of the equipment involved.

In this article, we’ll discuss exactly how and why both teacups and coffee cups are designed the way they are. Once you understand the design, you’ll be able to choose the right cup for every occasion.

What Is A Teacup?

A teacup is designed for drinking hot tea, just as the name implies.

Many people will pour tea into any cup that is convenient, but teacups were designed to maximize the flavor, temperature, and ease of preparing tea in a way that allows for polite drinking habits.

Everything about a traditional teacup has a purpose, from the material it’s made from to the size of the mouth and even the style of the handles.

Teacups are rarely purchased or served on their own, but rather they come as a set. A traditional tea set will include at a minimum a cup and saucer, or several cups and saucers, but often also includes a tea plate or sandwich plate.

A full set will also come with a matching teapot as well as a small jug for cream, a sugar bowl, and possibly a slop bowl, for emptying cold tea dregs into before refilling your cup.

What Are Tea Cups Made Of?

Teacups are usually made from a high-quality ceramic material, which is called china or porcelain, which are the same thing.

Higher quality teacups are even made from bone china, which has the addition of bone ash for durability and a beautiful, translucent finish.

Teacups and tea sets are usually decorated with specific designs and are usually very limited in their production. Some tea sets become extremely valuable if the print is rare and goes out of production.

Teacups may be different sizes, depending on where they were the manufacturer. In China, cups are designed to hold no more than 30mL of liquid.

Teacups are a specific shape, designed to cool down quickly from a rolling boil to a conveniently drinkable temperature. For this reason, they are shallow, with a wide, open mouth.

In some recipes, you’ll see teacup listed as a unit of measure, the same as a teaspoon or simply, a cup. This is particularly common in Indian recipes or cookbooks.

If you come across this measurement, it is equal to 190mL or approximately 4/5 of a cup in the U.S. Standard Volume.

Not all teacups come with handles, but those that do are designed to be held delicately, between your thumb and either one or two fingers.

This does not allow for a great grip, which is why teacups are small in size. So they can’t be too heavy or too unwieldy to hold properly.

The single finger handles, which pull away from the slope of the teacup, keep your fingers away from the cup itself, which can be quite hot from the boiling water. So they are designed for safety and delicacy.

Traditional teacups made in Asian countries are less likely to have handles at all. In fact, they are sometimes referred to as tea bowls. But most European designs will have handles, as described.

What is a Coffee Cup?

Again, as the name implies, a coffee cup is a cup designed for drinking coffee.

There are as many different types of coffee as there are coffee cups, however, which makes them quite different from teacups.

The similarity instead is in that they are designed specifically for the beverage they’re named after.

What Are Coffee Cups Made Of?

Coffee cups, like tea cups, are usually made from ceramic. There are fine dining collections that include coffee cups that look, in their design, very similar to tea cups with their patterns.

Coffee has become more of a casual affair, and they’re more likely to be included in a set of standard, daily use tableware or as unique, standalone designs.

Many people also bring their coffee with them through their daily adventures, which has encouraged the rise in popularity of travel mugs, which are more likely to be made of stainless steel are another thermo-protective material.

There are, of course, also disposable coffee cups. Many restaurants and cafes will also serve tea in these cups, though they were designed for coffee primarily.

Disposable cups are mainly paper, though some also have a very thin, almost waxy lining to add durability which is made from plastic polyethylene.

As previously mentioned, there are many different ways to make coffee which has an impact on the size of the cup it is served in.

Lattes, cappuccinos, mochas, and Americanos are often served in very large, rounded mugs that allow for plenty of milk, foam, or boiling water.

Lattes and mochas may also be served in wide, short, and flat cups to display latte art. Traditional cappuccino cups may be a bit smaller and rounder, to be cupped in the hand.

On the other hand, an espresso is only 1 ounce of pure, unadulterated coffee, and is therefore served in a much smaller cup, as are traditional macchiatos of approximately the same size.

An American measurement of 1 cup is 237mL or 8 fluid ounces, which is also the traditional size of a coffee cup purchased for daily, at-home usage in America.

However, Americans really like their coffee, so the typical coffee cup for home use increasingly holds 12 or even a full 16 ounces.

It’s also important to note that these measurements differ once your out of North America. You may find that coffee cup sizes are different if you’re traveling in Europe or Asia.

If you are going to a café or buying takeaway coffee, standard coffee cup sizes are 8 ounces for a small, 12 ounces for a regular, 16 ounces for a large, and, where available, 20–24 ounces for an extra-large.

Of course, depending on the coffee shop, these sizes may also have their own unique names, such as Grande instead of large. Again, Americans really like their coffee, so it’s not unusual to see a 12-ounce cup labeled “small” either.

Unlike tea, coffee is not usually prepared with boiling water, at least not directly, as that can burn the beans.

It doesn’t need to cool down as quickly. In fact, many people like their coffee to stay hot as long as possible. For this reason, the shape of a standard coffee cup is quite different from the shape of a teacup.

A basic coffee cup will be tall and narrow, with less exposed surface area for the heat to escape.

Coffee cup handles are very prominent in their design, especially in comparison to teacups.

Because the cups don’t typically get as hot, but they do hold considerably more liquid, depending on the type of coffee you’re drinking, the handles need to offer more stability and durability.

Coffee cup handles are usually large enough to accommodate 2-4 fingers. Although depending on the mug and the size of your hands, it’s not unusual to be able to grip your handle with a complete fist.

Coffee is not considered as elegant of a beverage as tea, so you’re not expected to hold it with quite as much etiquette.

Standard china and porcelain are the same product but go by different names depending on their location.

In the U.S., you’re more likely to refer to your fine dining dishes as china, though if you’re in Europe you probably prefer the term porcelain, which means seashell in Latin.

Fine bone china is different in that it’s made with an additional ingredient: bone ash. This gives the tableware a unique color that is almost translucent.

It’s also less brittle and, despite being thinner than porcelain, it’s less likely to break. The durability increases with the percentage of bone ash.

Bone china is the more exclusive and therefore expensive option. These wares do have animal products in their makeup, so they aren’t considered totally vegan.

Can You Pour Boiling Water Into Bone China?

You should never expose your bone china or fine china to extreme variations in temperature as it could cause them to crack or even shatter.

You can pour boiled water into bone china, but it should not be a cold cup, it should be at least room temperature if not even warmed slightly first.

A great approach would be to run your fine china under warm or hot tap water before adding the boiling water for your tea or coffee. Ideally, you’ll also let the boiled water sit for a minute or two before pouring.

How To Make Tea Taste Better?

The flavor of tea is a personal preference, though depending on the type of tea, there are many ways you can adjust the flavoring to make it more enjoyable.

Many people simply add cream or sugar, or similar additives, much as they would with coffee.

You may also want to try making your tea with previously boiled water that has cooled down to no hotter than 170 F. This can help take the bitter edge out of some teas.

You can also season your tea with spices, such as a Chai latte (or chai) might have, or flavorings like vanilla or honey.

Up Next: Milk Steamer Vs Milk Frother – How To Tell The Difference

Can You Freeze Jackfruit? – The Ultimate Guide

Can You Put Stainless Steel In The Microwave?