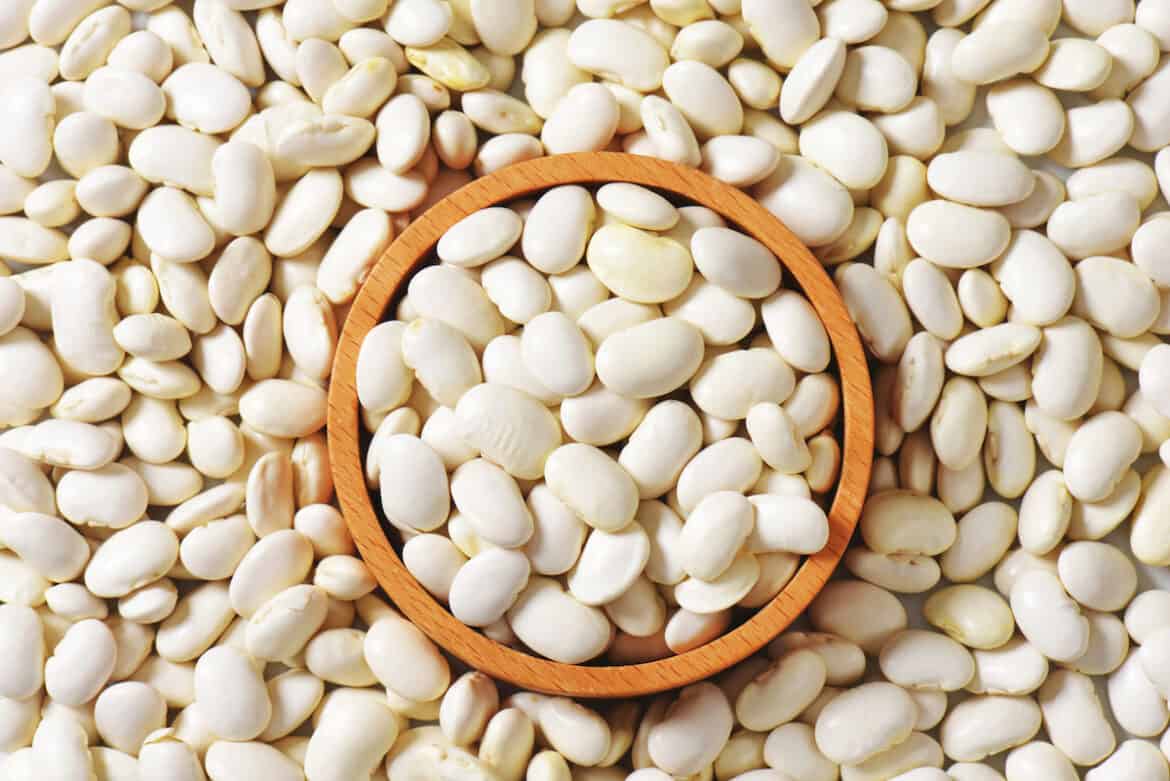 But many recipes call for “white beans” or “small white beans” and it may leave you wondering what type of bean, specifically, you’re supposed to use.

So what are the different types of beans? There are many types of small white beans, most notably navy beans, baby lima beans, and Great Northern beans. Cannellini beans are larger, but they’re one of the most popular white beans on the market. Black-eyed peas are small, but they’re not entirely white. Full-grown lima beans are more cream than white, but they can be used as a white bean in many recipes.

This article will explain the differences between each of these white beans and give you some ideas where each would be best used in different types of cooking.

Beans can often be used interchangeably in recipes, depending on what you have in your pantry, but there are differences in textures, size, and flavors that can impact the outcome of your dish.

Let’s look at some of the most popular types of white beans and how you can use them.

If a recipe calls for small white beans, it is probably referring to Navy beans.

They’re called Navy beans, not for their color, but for their presence as a staple product used by the US Navy.

They’re strikingly white without any hint of green or brown.

Navy beans are one of the smallest of the white beans at about the same size as a pea.

Cooked Navy beans are one of the softer beans, turning quite creamy. This makes them ideal for use in soups and especially making bean dips.

Even though they’re soft beans that will lose their shape more than some of their sturdier relatives, they still take on average of 1 ½ – 2 hours to cook.

Baby lima beans are even smaller than Navy beans and just as white. They’re more likely to be referred to by name, however, or called butterbeans.

They’re creamy and buttery when they’re cooked, hence their nickname.

Because of their soft texture, they work well to make dips or cooked into soup, stew, or even a casserole where you don’t want a stiff bean.

To cook dried baby lima beans, simmer for up to 1 hour.

You want to be sure they’re well cooked, as they tend towards being starchy, but not overcooked to prevent them from getting mushy.

Despite being called “great”, Great Northern beans are medium in size, at best.

One of the most distinguishing features of these particular small white beans is the fact that their mild flavor readily soaks up the flavors and seasonings in any dish they’re prepared in.

This makes them very versatile and a good introduction to beans for those who are hesitant about adding them to their diet.

These small white beans keep their shape well, cooking up to have a nice soft texture that is still firm.

They’re commonly baked in casseroles or used for dishes like pork and beans because, even after they’re well cooked, they don’t go mushy.

Great Northern beans take about 45 minutes to 1 hour to cook and they work well in soup or stew with plenty of fresh herbs and seasoning.

Cannellini beans are also called white kidney beans because that’s exactly what they are.

They have a slight pink tint to them, a nod to their rich red cousins.

White kidney beans are the largest of the white beans, so it’s a stretch to put them in a small white bean article, but they do substitute well for many other types of beans.

They have a mild flavor, just a little bit nutty. For larger beans, they do get soft when they’re cooked, but they retain their firmness and create a meatiness to your dish.

After soaking for 6 to 8 hours white kidney beans need to simmer for 1 ½ to 2 hours before they’ll be ready to eat.

Cannellini beans are popular in Italian dishes, especially of a vegetarian nature because they’re hearty and filling. They’re one of the most popular beans to use in a bean salad or other Mediterranean dishes.

Black-eyed peas or beans aren’t entirely white, they have a small black eye on each bean.

They are small and quite plump, being more round than the average oblong or kidney-shaped bean.

They’re denser than many other white beans, retaining their firm texture even after well cooked.

They will be fully cooked after only 30 minutes to 1 hour, but overcooking them won’t alter the texture much.

They are perfect for offsetting salty dishes with their earthy flavor, so use them in casseroles or sauces that have bacon or ham.

Black-eyed beans are commonly used in Greek cuisine so, like cannellini, you’ll see them called for in a variety of Mediterranean dishes with plenty of tomatoes and fresh herbs.

Full-sized lima beans aren’t as small or as white as the baby versions, being slightly more cream-colored.

Lima beans are starchier than most other varieties of white bean, creating an almost potato-like texture to your dish with a buttery flavor.

Lima beans have a tendency to go a bit mushy, though they will still take up to 1 hour to cook.

To get the most enjoyment out of them, use them with a thick, creamy sauce to make the most of their softer texture.

Beans, in general, are well known for their high nutritional value, white beans are no exception.

Most noticeably, white beans are a great source of plant-based protein, providing an average of 17 grams of protein per 1 cup serving. For that protein, you will get less than a single gram of fat.

Beans are high in carbohydrates, so they don’t fit into a keto diet, but they also contain a lot of fiber, making them great for the health of your gut and digestive system.

White beans are also loaded with vitamins and minerals that are essential for health. They’re a particularly good source of copper, folate, and iron, but they have a healthy supply of potassium, zinc, calcium, and magnesium as well.

If you combine all this useful nutrition you can do your body a lot of good. Beans are frequently used to manage weight, promote protein synthesis, and improve digestion and heart health.

The calories in white kidney beans depend on your serving size. For a ½ cup serving of cooked beans, there will be approximately 125 calories.

You’ll also enjoy 9 grams of protein, 6 grams of fiber, and less than 0.5 grams of fat.

If you eat canned white kidney beans the nutrition content will be mostly the same except you can expect to have quite a bit more sodium.

What are brown beans?

In North America, if you find a recipe that calls for brown beans, you can easily use Pinto beans or even Kidney beans.

However, there are Swedish brown beans that are about the same size as Pinto beans with a sweet, slightly nutty flavor. They’re a smooth, solid brown color with a small white eye. They’re soft and creamy and perfect for using in meat stews or chili.

Up Next: The Best Beans For Chili

Can You Freeze Grapefruit? – The Complete Guide

Gnocchi Vs Pasta – What’s The Difference?

Orzo Vs Couscous — What’s The Difference?

Spam Vs Scrapple — What’s The Difference?

Porridge Vs Congee — What’s The Difference?