How To Reheat Spaghetti Squash – The Best Way 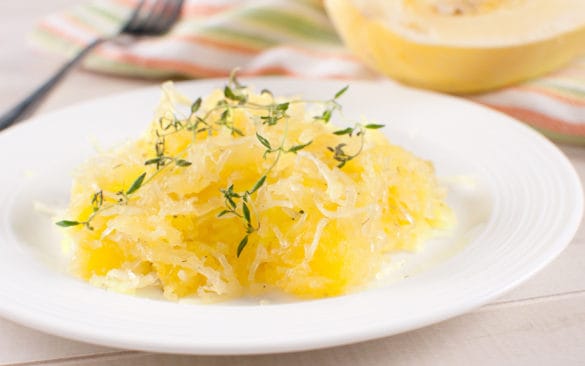 Spaghetti squash is the answer to still enjoying pasta on a low-carb and gluten-free diet. Squash manages to replicate spaghetti really well, with the orange flesh coming out in long strings, much like spaghetti.

Spaghetti squash can be paired with so many different sauces and toppings, and with its additional vitamins, it is perfect to add into your diet.

However, making spaghetti squash from scratch can take some time, so freezing it helps you have a good supply on hand for a quicker meal, but what is the best way to reheat it?

Be sure to store the spaghetti squash in the right conditions, to ensure that it remains its great quality and taste for when you are ready for your next squash meal!

Surprise, surprise—my favorite way is reheating spaghetti squash in on the stovetop! Who would’ve guessed?

Many of you might already know that I prefer using the stovetop for most dishes when it comes to reheating. You just can’t beat the way the oven can evenly heat any type of food without compromising taste or texture.

Reheating Spaghetti Squash On The Stove

You also do not need to completely thaw the spaghetti squash before reheating it on the stovetop.

Place some water into a saucepan and lightly salt it. Allow the water to come to a boil and add in the spaghetti squash. Turn the heat down onto low and leave the spaghetti squash to simmer in the boiling water for up to 7 minutes, until it is completely heated through.

Cons of using the stovetop – The stovetop will take longer to reheat the meal than the microwave. You need to wait for the water to boil first and then adding in the squash for another few minutes. Overcooking the squash could turn it mushed and soggy, which is not what you would want to achieve.

Reheating Spaghetti Squash In The Microwave

If frozen, allow the spaghetti squash to partially thaw in the refrigerator, or simply remove the chilled squash from the fridge.

Place the spaghetti squash into a microwavable dish, and drizzle in a small amount of olive oil, along with some seasoning. Mix it together gently and put the dish into the microwave.

Cover the dish partially with a lid or paper towel, and leave it to cook on medium power for 45 seconds. Remove from the microwave, stir it around and check the heat, if needed, place it back into the microwave for another 30 seconds.

Reheating Spaghetti Squash In A Steamer

Allow the squash to steam for 5 minutes until the strands are cooked through and warmed completely. Once reheated, serve immediately.

Cons of using a steamer – Like a stovetop, the steamer method does take a while longer than the microwave. You will need to wait for the steamer to heat up, and then more time for the squash to heat through. If left in the steamer for too long, the spaghetti squash might also become too soft and mushy from over-steaming.

Reheating Spaghetti Squash On A Skillet

You will need to thaw the spaghetti squash first before using a skillet to reheat it. Once thawed, place the squash on a plate and pat it as dry as possible, the more moisture you can remove, the better.

Heat a skillet over medium heat and add in a tablespoon of olive oil. Once the olive oil has heated, add in the spaghetti squash and spread it around to form a thin layer in the pan. Season with salt and pepper and let it cook until golden brown and crisp.

This will not give you the usual, soft noodles, but instead changes it up a bit to give you a plate of crispy, tasty noodles.

Pros of using a skillet – Using a skillet allows you to crisp up the noodles, giving them a different texture than what you would get reheating them in the microwave, stovetop or steamer. It does not take too long to do it either.

Is Reheated Spaghetti Squash As Good As Freshly Cooked Squash?

This question is more relevant to when you are freezing spaghetti squash but also does slightly speak for squash that has been left in the fridge.

Fresh spaghetti squash will always be better than that which has been frozen or refrigerated, however, this in no way means that you shouldn’t keep it for later.

Being a seasonal vegetable, spaghetti squash can be difficult to find out of season, so if it is a favorite of yours, it is a good idea to stock up on some in the freezer.

While reheated spaghetti squash might not be as wonderful as fresh, it does still hold up well and keep most of its great texture and taste.

You will lose some flavor and texture through the freezing and thawing process, but not much, and added in with some delicious ingredients or sauces, you will barely be able to notice the difference.

This helps to remove as much excess moisture from the squash as possible and chills the squash down to avoid moisture in the freezer container.

Once chilled, the spaghetti squash can be placed into a freezer bag, sealed tightly with as much air removed as possible. Label the bag with the date of freezing.

You could also choose to separate the strands into smaller portion sizes, and place these into individual freezer bags, to have access to single servings without having to defrost the whole lot.

Kept in the freezer with the right storage conditions, spaghetti squash can retain good quality and texture for up to 8 months. It will be fine to eat after this period, but the taste and texture will deteriorate.

Luckily, no. Freezing spaghetti squash does not affect the nutritional value that it holds, so you can still enjoy it at a later stage with all the health benefits you enjoy.

Freezing slows down the deterioration of the vegetable’s nutritional value, so it is all preserved for longer, along with all the great nutrients.

How long can spaghetti squash be kept in the fridge?

Do not throw away leftover spaghetti squash from dinner.

Can you overcook spaghetti squash?

If you are cooking it to enjoy at a later stage, cook it till it is al dente, so it can be reheated to perfection for a meal later on.

Up Next: Can You Freeze Spaghetti And Meatballs?

Can You Freeze Cooked Ham? – The Best Way

Can You Freeze Gazpacho? – The Best Way