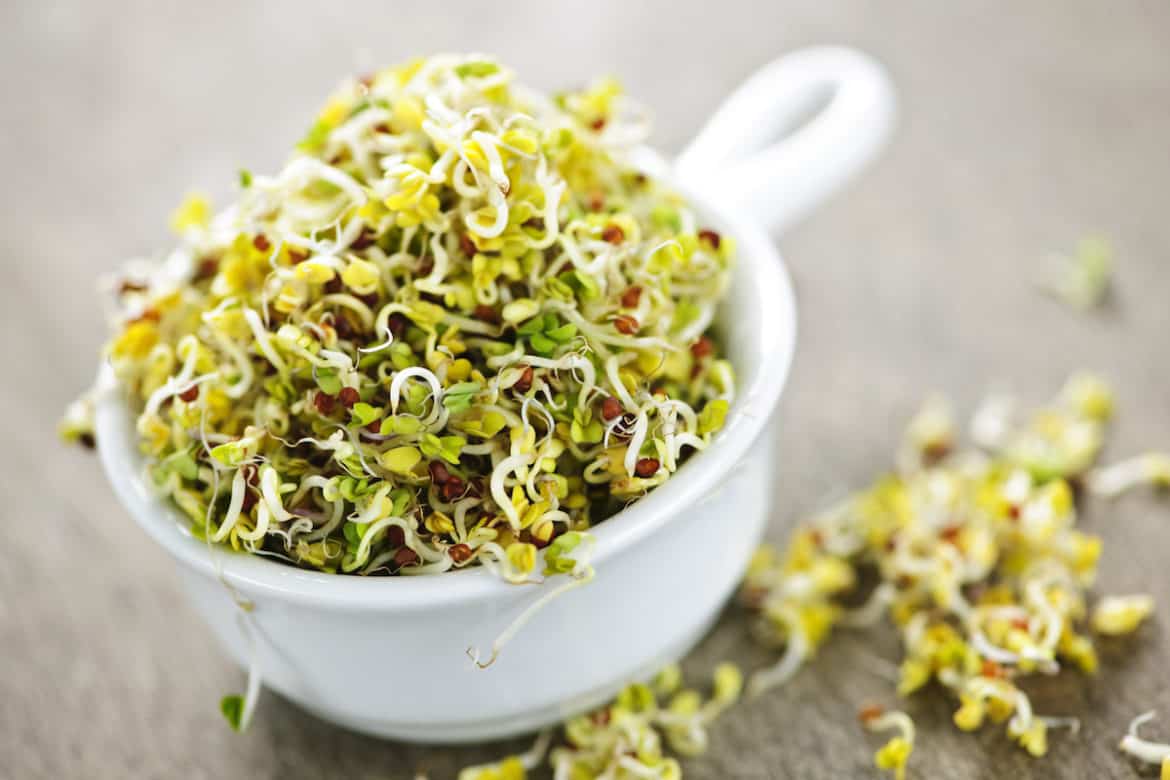 Sprouts are becoming more popular as people are starting to understand and recognize their nutritional value. Sprouts form when little seeds are germinated and grow into very young plants, which are then harvested.

These sprouts can be enjoyed raw or boiled, but which is better? There is a bit of debate regarding this. One side argues that eating sprouts raw is the best way to preserve and enjoy their full nutritional value, while the other side believes that boiling sprouts help to kill off harmful bacteria that could lead to food poisoning.

The Benefits of Sprouts

Bean sprouts are incredibly nutritious foods, considering how small they are. The nutritional value of sprouts differs between the different types, but sprouts are more nutritious than unsprouted and fully grown versions of the plants.

In fact, many people actually grow sprouts at home on their kitchen counter. I found this amazing seed sprouter that you can pick up on Amazon, and it makes the process so easy.

Due to their high nutritional value, bean sprouts have many different health benefits, which have been recognized for decades. These benefits include:

With all their benefits, many people believe that cooking or boiling bean sprouts might destroy some of the nutrients and benefits, but are they actually safe to eat raw?

Certain bean sprouts cannot be cooked, such as alfalfa sprouts, as they are so delicate. Some choose to continue to eat these raw, and others choose to stay away from them completely.

Sprouts are grown in water or in humid environments. While it is safe to eat raw sprouts, the moist and warm conditions they are grown in do increase bacterial growth.

For this reason, it is not advised for children, pregnant women, the elderly and those with a compromised immune system to consume raw sprouts.

There are so many different ways to eat raw sprouts, either sprinkled on a salad or added into sandwiches and wraps for an extra crunch. Many people enjoy just eating a handful of sprouts as is.

However, before bean sprouts are eaten raw, they need to be washed thoroughly. They can be placed in a colander and placed under running water and rinsed through properly. Although as much as you wash your sprouts, this does not completely remove all the bacteria on them.

There have been numerous cases where raw sprouts have been linked to food poisoning, which have been caused by bacteria on the raw sprouts such as E. coli, salmonella, staphylococcus and listeria. These are found more commonly on sprouts than other plants due to their moist and humid growing conditions.

For this reason, eating sprouts is unsuitable for many people, especially those at risk. The FDA recommends that sprouts be cooked through thoroughly to help reduce the risk of food-related illnesses.

There are many ways to include cooked sprouts into your daily meals, by using them in stir-fries, soups, and stews, so you are able to avoid only eating raw sprouts to avoid any illness.

In saying this, there are more nutrients and vitamins contained in raw bean sprouts, so it is up to you whether the risk is worth it or not.

To show the nutritional value of raw sprouts, here is the nutritional contents of 100 grams of raw mung bean sprouts with regards to the recommended daily amount of nutrients and vitamins:

This goes to show the incredibly high nutritional content of such a small amount of raw sprouts, and why so many people choose to eat them raw daily.

Due to the increased risk of food poisoning from raw sprouts, many people choose to boil their sprouts before eating them or adding them to salads, wraps, and sandwiches.

Sprouts, including other foods, need to be heated or cooked to 160 degrees Fahrenheit to kill most of the bacteria. This makes them much safer to eat, and highly reduces the risk of foodborne diseases.

To avoid having to boil sprouts before consuming, many people choose to include the sprouts into their meals while cooking. This could be in the form of adding the sprouts to stir-fries, stews, and soups and allowing them to cook for a short time with the rest of the meal.

Unfortunately, boiling or cooking the sprouts does kill some of the nutrients and vitamins they contain, but not so much that they do not still hold some great health benefits.

Aside from boiling sprouts, you could also sauté, steam or blanch them, all of these can raise the temperature of the sprouts enough to kill off harmful bacteria without completely destroying the nutritional content of the sprouts, or ruining their texture or taste.

Boiling your sprouts to a high temperature is the best way to prevent bacterial growth and any illness that may be associated with eating raw or undercooked bean sprouts.

5 Things To Know About Sprouts

How long should sprouts be boiled?

Sprouts should be boiled according to their size, but as a rule of thumb, sprouts should be left to boil around 3 to 5 minutes to ensure enough harmful bacteria is destroyed, and that the sprouts are soft and tender.

Are sprouts good for weight loss?

Sprouts are great for weight loss. They are high in vitamins and nutritional content but have very little calories.

This means you can get in a good amount of your recommended daily intake without having to worry about any extra calories. Sprouts also contain a high amount of fiber, which makes you feel full for a longer period of time.

Can you steam sprouts?

To do this, you should bring around an inch of water to boil in a pot, where you will place the steamer insert or basket into. Place your cleaned sprouts into the steamer basket and leave them to steam for around 5 minutes, or until they are tender.

Steaming is another good way to ensure that harmful bacteria on sprouts are killed, making them much safer to consume.

Eating raw sprouts can promote good health and be a great source of vitamins and minerals, but unfortunately, they do run a high risk of causing food poisoning or related illness due to harmful bacteria that can grow during the moist and humid sprouting process.

The safest option would be to boil your sprouts before consumption, making sure they reach 160 degrees Fahrenheit before removing from the heat. This heat level should kill off most of the harmful bacteria and make the sprouts much safer to eat.

All is not lost though, there is still a good amount of nutrients available from boiled or cooked sprouts, much more than you would find in many other fruits and vegetables.

It is always better to play it safe, especially for children, the elderly, pregnant women and those with a compromised immune system. Cooking the sprouts to high temperatures makes them safe enough to be consumed by almost anyone.

If you are set on eating your sprouts raw, try and wash them as thoroughly as possible. This won’t kill all the harmful bacteria, but it is better than nothing!

The Best Greens Powder Without Wheatgrass

Rice Vs Oatmeal – What’s The Difference?

Shortening Vs Lard – What’s The Difference?

Spatula Vs Turner – What’s The Difference?