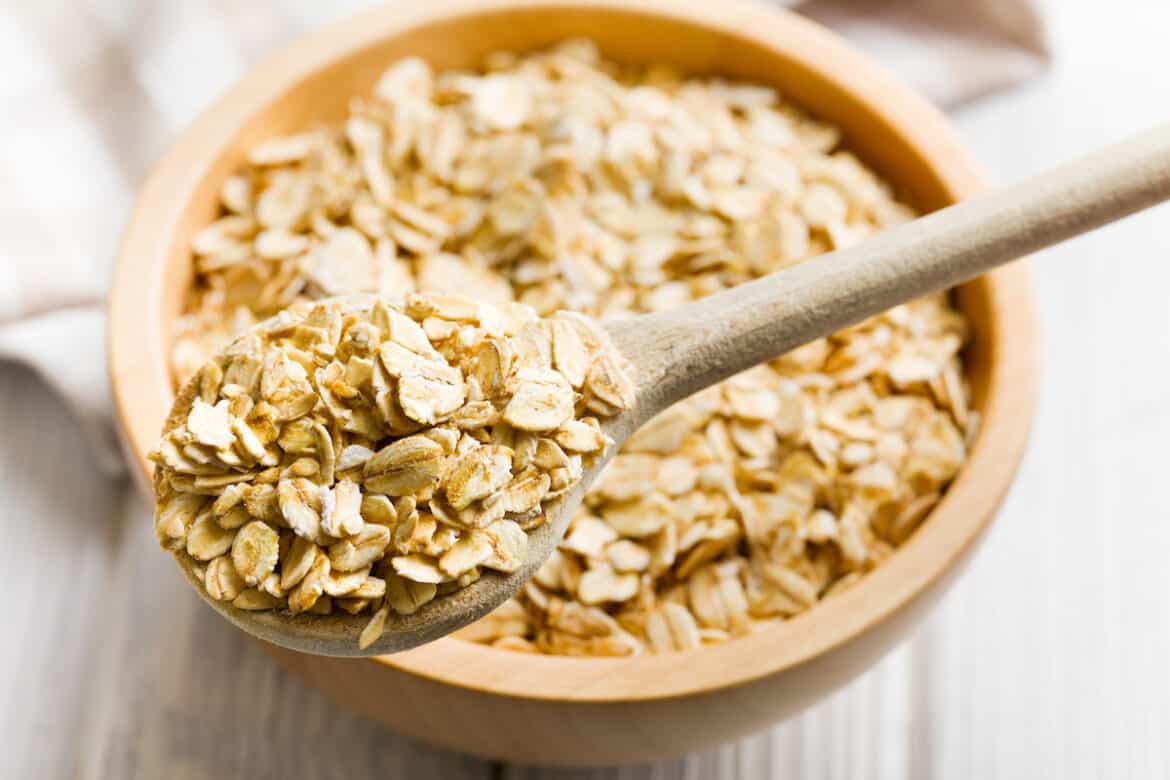 In North America, “porridge” is used almost synonymously with “oatmeal,” but they are different recipes and also have different ingredients.

Both types of oats make great breakfasts, but if you’re planning on baking with oats, you have to know the difference between your porridge oats and your rolled oats.

So what’s the difference between porridge oats and rolled oats? Rolled oats are flattened using heavy rollers, helping them absorb water or milk quickly so they cook within about 5 minutes. Porridge oats, on the other hand, are either cut or ground. The result is less consistent than a rolled flake and can result in a chewier porridge or creamier dish.

There are a few other key differences, so for a more in-depth answer to your question, continue reading.

What Are Porridge Oats?

Porridge oats aren’t specifically defined by the Whole Grains Council, but technically they can refer to any grain of oat that is made into porridge. Technically, that definition is not very useful when you’re trying to interpret a recipe.

Most often, if “porridge oats” are specifically called for, they’re referring either to Irish oats or Scottish oats, both of which are called porridge oats in their respective countries of origin.

By the way, if you haven’t tried these porridge oats you can get on Amazon, then you’re really missing out, they are the best I’ve ever found.

Irish oats are also called steel-cut oats. As the name suggests, the oat groats are sliced into two or three pieces by a sharp steel blade.

They will cook quicker than whole oat groats because there is a greater surface area for the water or milk to penetrate the oat.

Scottish oats are stone-ground instead of steel-cut. Using a stone to crush oat groats creates a much less uniform result, and there is usually just as much finely ground oat flour as there are small chunks of oats.

Because of the fine grind, porridge made from Scottish oats will cook quickly and turn much creamier, with a smoother consistency than either steel-cut oats or rolled oats.

What Are Rolled Oats?

Rolled oats are oat groats, or the whole grain kernel of oats with the hull removed, that have been steamed and flattened using a very heavy roller.

By steaming them before drying and packaging them, as well as increasing the surface size, rolled oats cook much faster than whole grain oat groats.

My favorite rolled oats are these from Amazon.

The longer oat groats are steamed and the thinner they are rolled, the faster they will cook.

Many people are confused over whether or not old fashioned oats are the same as rolled oats and, according to the reigning authority on oats, the Quaker Oats Company, they are the same and can be called by either name.

Porridge vs. Oatmeal – now this is an interesting comparison.

The difference between oatmeal and porridge can be summed up in a single sentence: all oatmeal is porridge, but not all porridge is oatmeal.

Porridge can be made from any grain simply by mixing it with water, milk, or broth. It’s often renamed for the type of grain that the porridge is made out of, such as oatmeal.

In America, the ever-popular dish “grits” is a type of porridge made from corn. It differs from polenta and cornmeal, though they’re all still considered porridge.

Congee and Arroz Caldo are both types of porridge made from rice, popular in China, and the Philippines respectively. Kasha is made using buckwheat and served as a side dish in many Central and Eastern European countries.

In South India and Sri Lanka, porridge made from the grain semolina and flavored with fragrant spices and/or vegetables is called Upma.

In Ethiopia, porridge is very popular and can be made using a wide variety of grains, served with yogurt. Without differentiating between the grains, this porridge is called Genfo.

And of course, all over the world oatmeal porridge can be made using any type of oat, including but not limited to both rolled oats and porridge oats.

Can You Substitute Porridge Oats for Rolled Oats?

You can substitute porridge oats for rolled oats, and vice versa, but the texture will be quite different and may alter specific recipes.

Using rolled oats will add some texture and chew, but the longer it cooks the softer it will become.

In baked goods, because Scottish porridge oats are much more powdery than rolled oats they will not act the same way. They’d be a better alternative to instant oats or potentially even hearty oat flour.

If a recipe calls for porridge oats and all you have are rolled oats, you can give them a quick run through a food processor to reduce the size of the flakes.

In almost all nutritional ways, rolled oats and porridge oats will have the same quantity of macro and micro-nutrients in equal serving sizes because the source is the same: oat groats.

However, the more processed the oat, the quicker your body will be able to break it down into glucose, so Scottish porridge oats may have a higher glycemic load than rolled oats. In other words, you may experience a quick insulin spike after eating them.

In 40 gram serving of dry oats, you will find the following nutritional components:

Oats, any way you eat them, are a good source of plant-based protein which is great for helping you feel satiated and may reduce over-eating or cravings.

Oats are considered high in carbohydrates, which is a great source of energy for your body. A good portion of those carbs is from fiber, both soluble and insoluble. Fiber has been proven to be very important to gut health and can also help to improve heart health.

Oats are also high in various vitamins and minerals, such as calcium, folate, and even Vitamin B-12. They’ve also been shown to boost serotonin levels, which can have a positive effect on your mental health and your quality of sleep.

How to Make Porridge Oats vs Rolled Oats

Making porridge out of any kind of oats is the same basic process. Add milk or water to a pot with your oats and cook until the desired texture is achieved. How long you cook your oats will depend on the type of oat you have.

In comparison, Scottish porridge oats will take about 10 minutes, and rolled oats will be ready in as little as 5 minutes.

With any type of oatmeal, you can add your choice or preference of toppings, such as seeds or nuts, honey or maple syrup, dried fruits or fresh berries, or any combination of the above. Oatmeal is also delicious when it’s spiced with cinnamon, nutmeg, ginger and/or cloves.

We hope this article helped you understand the differences between porridge oats and rolled oats. We’ve also included a few related questions in case they’re helpful, too.

All oats are naturally gluten-free as they don’t contain any wheat. However, if you’re gluten-sensitive or have Celiac’s disease you should read every label to see if your oats were processed in a manufacturing facility that also processes wheat products.

Cross-contamination is a risk unless your oats were made in a certified gluten-free facility.

How Many Calories Are in 1 Cup of Rolled Oats?

The size of your rolled oats may vary slightly depending on the brand, but as a point of reference, there are 300 calories in 1 cup of dry, Old Fashioned Quaker Oats.

Oats absorb water as they cook, so with no other ingredients added, 1 cup of cooked rolled oats will be approximately half the calories, around 150.

This is not an exact measurement, however, as the size and volume of your oats will vary based on how long they’ve been cooked and how much water you’ve used.

As a general rule, birds should either be foraging for their food as nature intended or eating seeds designed for the health of birds.

However, uncooked porridge oats are also safe for birds to eat and they will be gratefully consumed, especially during cold winters when other food is scarce.

Be careful to never feed cooked oats to birds because if they harden around the beak it can make it difficult or even impossible for them to open.

Up Next: How Long Do Overnight Oats Last? – Storage Guide

Pineapple Upside Down Cake With Bisquick

How Long Does Fruit Last In The Fridge?

Orzo Vs Couscous — What’s The Difference?

Spam Vs Scrapple — What’s The Difference?

Porridge Vs Congee — What’s The Difference?