Home Foodsguy Livermush Vs Scrapple – What’s The Difference?
FoodsguyThis vs That

Livermush Vs Scrapple – What’s The Difference? 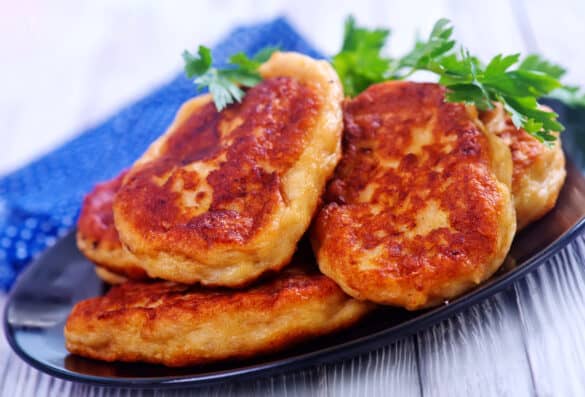 Livermush and scrapple are two specific types of pork items made in America, but which originate from different areas.

At first glance, one might think that livermush and scrapple are pretty much the same thing. Both are made from leftover pork scraps and trimmings and can be served in a similar manner.

However, the two are not the same, and there are a few important differences between them.

There are a few other differences between the two, including where they originated, how they are made, and how to serve them.

To help you tell the difference between the two, here is all you need to know about livermush and scrapple!

Livermush is a type of food that originated in the Southern United States. It is made from pig liver, pig head, and cornmeal.

This was a great way to salvage leftover pig scraps, along with pig liver, to make a delicious and filling food to enjoy with any meal, or even as a main meal on its own.

Livermush is at times considered to be the same as liver pudding, and while the two are similar, livermush is coarser in texture and is more common in the western part of North Carolina (moving up from the Southern US).

What Is It Made From?

When it comes to ingredients, livermush consists of pig liver (from where the name comes), head parts of the pig, and cornmeal to bind and thicken it all up.

To add flavor and depth to the food, sage and pepper are commonly used to spice the mix.

How Is It Served?

Livermush is popularly cooked by the slice. A slice is cut off of a premade loaf and is fried in a skillet with some grease or fat until it is golden brown on each side.

It can be served at breakfast, lunch, or dinner. When served as a breakfast meal, livermush is often served alongside fried or scrambled eggs and grits.

As a lunchtime meal, livermush is either fried or served cold, in a sandwich with mustard or mayonnaise.

It is becoming an increasingly popular dish all over, and due to this, there are more foods being made including livermush, such as pizza and omelets. You can add livermush to almost any meal, as long as you enjoy the flavor of liver!

Where Is It Eaten the Most?

Livermush is found mainly in the Southern US, as well as North Carolina. Shelby, in North Carolina, loves livermush so much that the town hosts an annual Livermush Exposition.

This began in 1987 and has continued to showcase the delicacy each year since.

It is such a celebrated dish there that the Cleveland County Commissioners and Shelby City Council have proclaimed that livermush is the most delicious, economical, and versatile of meats.

Scrapple, which is often confused with livermush and vice versa, is meat made from the mush of pork trimmings and scraps.

These are then combined with other ingredients to make it a more solid loaf.

Making scrapple came about as a way to use leftover pig scraps, in a way that makes it delicious and easy to eat.

It was made to make the most out of a pig and does so in quite a delicious way.

What Is It Made From?

Scrapple is made from leftover pork meats from the butcher, which cannot be used elsewhere. This meat is used up as mush to make scrapple, reducing waste down drastically.

The scraps of meat are turned into a form of mush, which is then combined with wheat flour, which is usually buckwheat flour, cornmeal, and spices. This helps to form a semi-solid congealed loaf of meat.

Scrapple is usually stored as a loaf and lasts for a few days. There are different ways to spice scrapple, with secret recipes being passed down by families.

How Is It Served?

Kept as a semi-congealed loaf, scrapple is sliced and pan-fried before being served. It can be served as breakfast with some eggs, on a sandwich for lunch, or with some sides as dinner.

Scrapple can also be bought in grocery stores and supermarkets and can be found both fresh and frozen.

Where Is It Eaten the Most?

Also known as Pannhaas, which is the Pennsylvania Dutch name, scrapple is considered to be most popular in the Mid-Atlantic states, such as Maryland, Delaware, New Jersey, Virginia, and Pennsylvania.

It is considered to be a traditional food of the Pennsylvania Dutch, which includes communities such as the Amish and Mennonites. However, it is enjoyed by many families, which is shown by its availability in many supermarkets.

Scrapple can also be found in New York. It is believed that German immigrants brought the dish to America over a century ago.

The Difference Between The Two

While it could make sense to compare livermush and scrapple, the two are very different, while being similar at the same time.

The main difference between the two is what the food item actually contains. Livermush, as the name gives away, contains mainly liver.

It might also contain head meat from the pig, but the defining ingredient is the liver, which gives it most of its taste and flavor.

Scrapple, on the other hand, does also contain pig meat, but might not always contain liver. It is made from the leftover bits of pork once the pig has been butchered. Sometimes there might be some liver in the mix, and sometimes not.

So while the two dishes are seemingly very similar, the best way to differentiate the two is that livermush always contains liver, whereas scrapple will only contain liver if it is available in the leftover bits of meat.

Livermush is more similar to pâté in texture, whereas scrapple is more like a solid meatloaf. However, both are firm enough to be sliced and then fried to be served up any time during the day.

The Difference Between Livermush And Scrapple

Livermush and scrapple might seem to be identical to those who have never come across them before, but the two are different. The main difference is given away with the names – with livermush being made primarily from pig liver.

Scrapple can include pig liver, but it doesn’t always. It is made from the scraps left over after butchering a pig, and whatever is available goes into making some scrapple.

Due to the inclusion of liver, livermush tastes more like a pâté and has more of a pâté-like consistency, whereas scrapple takes the form of a more solid loaf.

Both contain cornmeal, but are flavored with different herbs and spices to give them their own unique taste!

Another similar food is goetta. Goetta is another type of food brought over by German immigrants, who settled down in Ohio.

Including pork, goetta is made with pork hearts and pork skin, which is then added to some pinhead oats.

These are the original ingredients used in goetta, but nowadays most butchers use 100% pork shoulder and beef chuck and avoid any offal.

Due to the exclusion of offal and the inclusion of beef, goetta is seen as an easier taste to get used to. It is most commonly found in a sausage type roll, but this is also sliced and fried up until crisp.

You will find many small butcheries that have their own take on goetta, whether they make the original recipe with pork offal or the newer version which involves some beef for a more neutral taste.

Livermush tastes much like a soft, rich sausage patty. Made with pork liver, meat scraps, and cornmeal, the mix is flavored with sage and black pepper, like sausage meat usually is. The mixture is set and then sliced and fried.

Can You Eat Livermush Without Frying It?

Yes, livermush is fully cooked when you get it, so it is safe to eat it without frying. Some people enjoy having livermush cold on sandwiches, but it is more commonly sliced up and fried.

Frying and crisping the livermush brings out the flavor more and gives it a crispy outer layer like breakfast sausage.

Liverwurst is similar to livermush, made with liver, but it is instead a liver sausage.

It is made from pork liver and has added spices to enhance the flavor of the sausage. It can also be sliced up and fried, served for breakfast, lunch, or dinner.

What Is Liverwurst Made From?

Liverwurst is made from ground pork liver, pork scraps, onions, and a good few spices.

It retains the liver taste but is more palatable in both texture and flavor. It is creamy and has a wonderfully spiced taste. There are different recipes of liverwurst depending on the butcher you are buying it from.

Up Next: Minced Meat Vs Ground Meat – What’s the Difference?