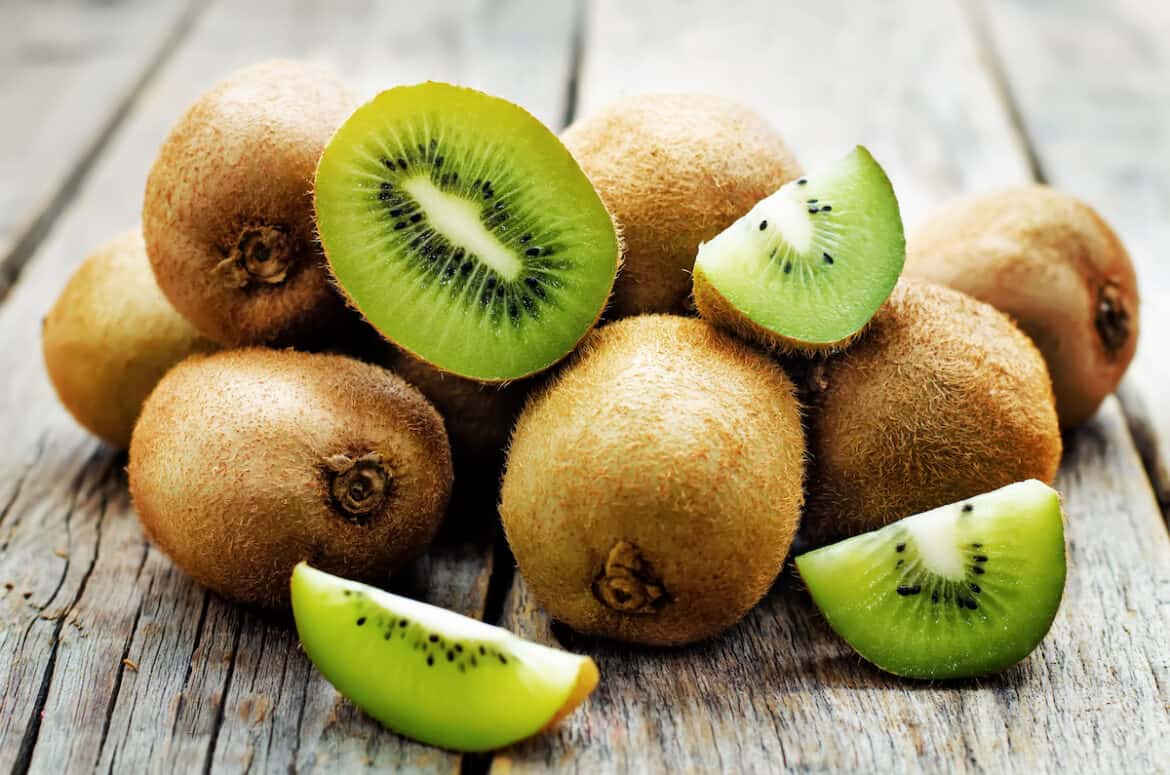 Kiwi fruits are quite unique, but there are a few lookalikes as well as a few fruits that taste very similar to kiwi. If you’ve found a fruit that reminds you of kiwi or are looking for a flavor substitute, this article will be your guide.

What are some kiwi-like fruits? Kiwi berries (berry-sized versions) and golden kiwifruits are very similar to kiwis, and are part of the same family. Feijoas and sapodilla fruit also bear a strong resemblance, though they’re not related. In terms of flavor, the closest comparisons are dragonfruit, strawberries, and passionfruit.

In the following article, we’ll give you a short description of each kiwi-like fruit to help guide you through the world of odd, delicious fruits.

What Is a Kiwi?

Kiwi fruit is actually a berry, though larger than you would commonly expect, about the size of an egg.

Kiwifruit, or simply kiwis, are the berries of a woody vine called Actinidia.

They’re native to China, though they spread to New Zealand in the early 20th century. As the fruit grew in popularity, they were exported around the world.

The vines will grow in most temperate climates, so now you can find locally cultivated varieties in California, British Columbia, Italy, France, Greece, Chile, and many Asian countries.

There are several other members of the kiwifruit family, though the most common is the fuzzy kiwifruit. They’re called fuzzy because their rough brown skin is covered in a scratchy fuzz.

Though the skin is edible, most people avoid it because of the unappealing texture.

The flesh of kiwifruit is bright green and very juicy. The center has a white core surrounded by tiny black seeds that create a radial design outward from the core. Every part of the kiwi is edible.

Kiwis have a unique flavor and texture, thanks to the tiny seeds. They are often described as having a taste that is a combination of strawberry and banana, with a bit of pineapple and citrus mixed in as well.

Kiwi can range from acidic and sour when the fruit is not quite ripe, to richly sweet and juicy as they mature.

Like most fruits, it is eaten raw and rarely cooked.

The skin has a dusty quality, similar to plums, but with a papery brown crown at the top of the berry where it connects to the branch, just like a fuzzy kiwi fruit has.

The white core is thinner and longer, matching the grape-like shape, but the tiny black seeds and radial design is the same.

Kiwi berries taste nearly identical to their larger cousins, though sometimes sweeter and somehow more complex. Most notably, they don’t have the papery, rough skin to influence your tastebuds.

Golden kiwifruit, not surprisingly, looks like golden versions of their green relatives.

This less-common kiwi is often slightly smaller than the conventional brown-skinned varieties.

The skin of this golden kiwi, however, is smooth and has no fuzz. The flesh inside ranges from bright yellow to yellow-green and some varieties have a red ring around the core, though these are rare.

The seeds are a lighter color as well, dark brown rather than black. The core tends to be thinner in golden kiwifruit as well.

The golden varieties tend to be sweeter and more tropical in flavor and aroma when compared to the green fuzzy kiwi.

The sweetness and the lack of fuzz make golden kiwifruit more desirable on the commercial market, despite the fact that they’re still less common.

There are two fruits that look surprisingly similar to kiwi fruit, though they don’t taste alike.

If you’re trying to figure out what type of exotic fruit you’ve found at your local market, inspect it for some of the following signs.

Feijoas are approximately the same size and shape as kiwis, however, their skin is a bright green and it’s smooth rather than fuzzy.

When it’s cut open, the flesh inside is a creamy yellow color with a texture more like a pear than a kiwi. The entire fruit is edible, including the skin and the jelly-like seeds found in the center of the fruit.

Feijoas have a taste that may remind you of kiwis, as there are notes of banana and pineapple, but they’re more tart than sweet, like a sour grape.

Sapodilla fruits are about the same size as fuzzy kiwifruit, though they have more of an almond shape.

They have light brown skin that is fuzzy, very similar to a kiwi, though this skin is inedible.

When you cut open a sapodilla, the flesh is golden, soft, and quite juicy, though it doesn’t have the texture of kiwi fruit. Rather than having many tiny black seeds, sapodilla has between 3-6 smooth, flat brown seeds that are inedible.

The texture and flavor of sapodilla is a cross between a pear and a perfectly ripe mango.

The previous fruits look quite similar to kiwi but don’t taste anything like them.

However, there certainly are a few fruits that are very comparable to the flavor of kiwi, so if you are looking for a flavor substitute, consider one of the following options.

Dragonfruit, or pitaya, doesn’t seem anything like kiwifruit at first glance, but these exotic, alien-like fruits do have a few similarities to kiwis beneath the surface.

There are three main types of dragonfruit: red, white, and yellow. All these fruits are oblong and tapered on one end, with fleshy scales that look somewhat like an artichoke’s petals.

Red dragonfruit has vibrant magenta skin and deep purple, pulpy flesh. White dragonfruit has a similar magenta outer covering but the flesh inside is snow white and dotted with black seeds.

What they have in common with kiwi fruit are the tiny black seeds that are spread throughout the flesh. This gives the fruit a very similar texture and consistency to kiwi fruit and the flavor is similar as well, though much milder.

Dragonfruit is sweeter than kiwifruit and has little to no acidity, though they have a similar tropical flavor.

Kiwi fruit has notes that are very similar to strawberries, so they pair well together and can sometimes be substituted for each other.

For both kiwifruit and strawberries, it’s difficult to separate the texture from the flavor.

They are both very juicy fruits that provide a mouthful of tiny seeds with every bite. Both berries become sweeter as they ripen and have a stronger tart flavor when young.

Kiwi fruit tastes more like tropical fruit than strawberries, whereas strawberries have a more obvious berry flavor, but the balance of sweet and tart is similar, as is the high water content.

Depending on the variety of kiwi, they are often a combination of sweet and tart at the same time.

Passionfruit is very similar, though it’s like a sweet and sour orange, whereas kiwi is closer to a sweet yet tart lime.

Every bite will include seeds as well, though the seeds of passionfruit are larger and will have more of a noticeable presence, more like the seeds of a pomegranate or watermelon.

The experience is different than eating a kiwi, though similar enough to notice the comparison.

Do Kiwis Need to Be Refrigerated?

Whole kiwis do not need to be refrigerated, but they should be kept out of direct sunlight and away from any exposure to heat.

Once they’re perfectly ripe, transferring your kiwi to the fridge will slow the ripening process, keeping them fresh longer.

For more tips on extending the life of your fruit, check out our related post on how to store kiwi.

It is generally considered safe for dogs to eat kiwi fruit, however, they are very high in vitamins, minerals, and fiber that your pet may not be used to.

You should avoid feeding your pet too much fruit at any one time to prevent any possible digestive discomfort resulting from the new diet.

It’s also a good idea to only give your dog small amounts of peeled kiwi. The peeling isn’t toxic or inherently dangerous, but it can be a choking hazard.

Up Next: 31 Foods That Start With K

Can You Freeze Spam?