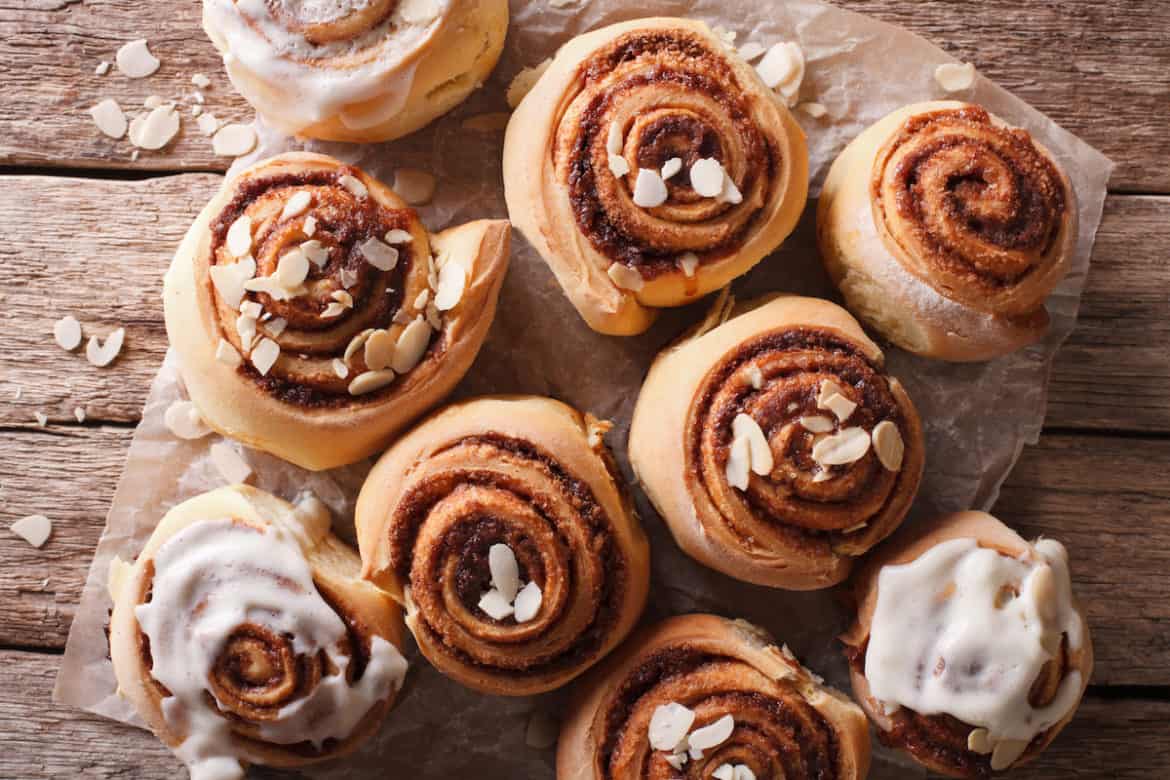 There is nothing better than the aroma of cinnamon rolls baking in the oven. It fills your house with the delightful scent of cinnamon and bread and frosting. And of course, those cinnamon rolls taste oh so delicious straight out of the oven.

The thing is, it’s so hard to keep your cinnamon rolls moist. Even straight from the oven, you have to be careful.

What can you do to keep them moist and delicious instead of dry and drab? The answer to keeping them moist is all in the packaging methods. If you don’t store them properly, you can bet you will end up with dry cinnamon rolls that won’t taste very good. The key to moist cinnamon rolls is to keep them in an airtight container.

We’ve put together a guide to walk you through every little thing you should know so you can ensure you keep your cinnamon rolls moist right from the start and won’t have to worry about they getting dry or hard.

One thing you will need though is a set of quality airtight containers. I use this set from Amazon and am completely in love with them. They will keep your food and moist practically forever!

From start to finish, we’ve got you covered with all of the best tips to enjoy your cinnamon rolls. You can even store them away and reheat them later with no worries. Don’t waste those cinnamon rolls, enjoy them repeatedly.

Keep reading to learn everything you need to know about the best, moist cinnamon rolls.

Your Guide to Cinnamon Rolls

Cinnamon rolls need no explanation. They speak for themselves. And if you haven’t had cinnamon rolls, it’s time for you to step out on the edge and try one!

Keeping your cinnamon rolls moist starts from the beginning process. Mixing them up and making them is important to the process of keeping them moist. Keeping them moist is about more than just storage tactics.

How to Make Cinnamon Rolls

There are so many different ways to make cinnamon rolls but we are going to walk you through a basic recipe to give you a good reference point for your cinnamon rolls.

We aren’t even going to cover the icing specifics but icing on your cinnamon rolls could help keep them moist so don’t skip that step.

Preparing your cinnamon rolls can take quite a bit of time. But trust us, it is well worth the time it takes. This recipe is not the only recipe you can follow. There are alternatives and some of them may not require as much rising time as others.

You can search around and find the recipe that you like best or that you think works best for you compared to others. We just wanted to provide you with a basic example of the ingredients and the process to try to get to the bottom of what could cause your cinnamon rolls to be dry.

There are two key things we would like to point out from this recipe that may help with not having dry cinnamon rolls. You will notice the yeast was placed into warm water and not milk. This could make a difference.

Additionally, the buttermilk that is used in the process can make a difference in keeping the cinnamon rolls moist. Many recipes don’t call for these 2 ingredients but you might consider the effects they can have when you are perusing recipe options.

Storing your cinnamon rolls properly will be another important factor in ensuring you keep them moist.

If you make the efforts to store them properly, your cinnamon rolls will stay delightful even when they are not fresh from the oven.

Here are some storage tips that you should follow for the best results.

These tips will go a long way to ensuring that your cinnamon rolls stay moist and delicious. This will not guarantee they won’t dry out but it will certainly help.

If all else fails and you still end up with dried cinnamon rolls, you can reheat them with a bit of butter on the top and they will taste good as new. Here are some steps for reheating.

Rest assured that with all of these tips there has got to be SOME way you can enjoy a moist cinnamon roll, even when it is not fresh out of the oven.

Cinnamon rolls are tricky to preserve without drying it but these tips and tricks are designed to give you the best possible results you could ask for and your cinnamon rolls will thank you for following the steps. We think your taste buds will probably thank you also.

We hope that you have enjoyed this guide to keeping your cinnamon rolls moist and that you find the content to be useful and informative. You should be fully prepared to go forth and enjoy those moist rolls!

We’ve put together some common questions and answers in this section and we invite you to check them out to see if you might find any of the information within valuable.

Is it OK to Store Dough in the Fridge Overnight?

If you don’t make it back to your dough to get the cinnamon rolls cut or baked right away that is perfectly ok. Your dough should be fine covered and stored in the fridge for up to 24 hours.

Be sure it is covered and stored in the fridge if it is going to be more than an hour or two. Otherwise, you should be just fine.

Can You Keep Your Cinnamon Rolls from Shrinking or Falling?

Unfortunately, shrinking and falling is a side effect that often comes from baking with yeast. It could also depend on the recipe that you are using.

What is really happening is that the steam from the dough causes the bread to expand and then when the steam is no longer present, the expansion subsides.

There are some things you can do that might help slightly. Don’t over knead the bread in the kneading process. This pushes air into the dough that will try to escape later. Letting the dough rise for too long before rolling it and cutting it will also cause excess air that will shrink or fall later.

Can You Freeze Kitchari?

How To Reheat Krispy Kreme Donuts

Can You Freeze Crawfish?

How To Use A Toaster – The Complete...

Can You Freeze Jell-O Shots?

Can You Freeze Icing?

Can You Put Glass In The Freezer?

How To Reheat Bacon (And Keep It Crispy)

How To Reheat A Croissant

Can You Freeze Chicken Salad?

How To Cook Bamboo Shoots

The Complete Guide To Dehydrating In An Air...