How To Make Jiffy Cornbread Without Sour Cream 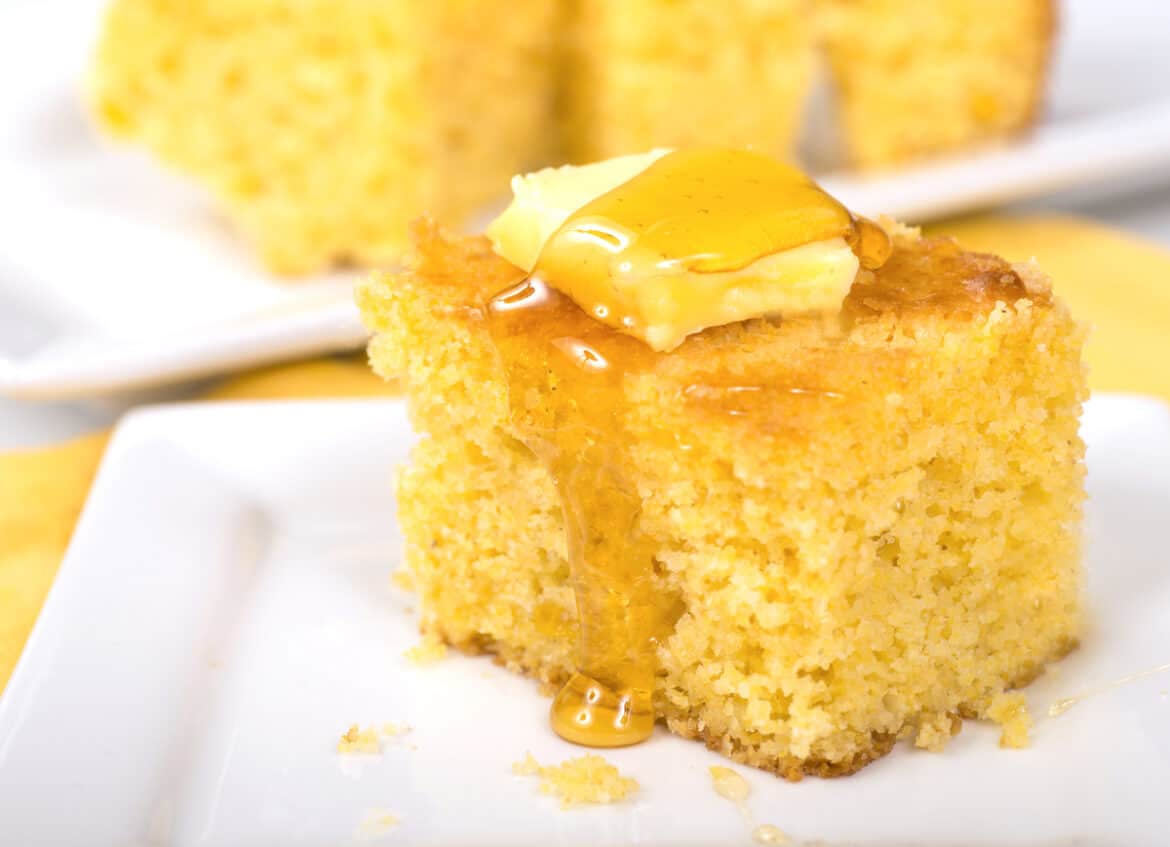 Jiffy Corn Muffin Mix is arguably in every household.

Jiffy has truly created the perfect baking pre-mix that simply makes your life so much easier. By simply adding an ingredient or two, you have the perfect cornbread in minutes!

Most of the Jiffy cornbread recipes require a cup of sour cream; however, there are many reasons why you might not want to use sour cream.

You might want a vegan or lactose-free alternative, you might not have sour cream in the fridge or there may not be any available at the store. Whatever your reason might be, there are luckily many substitutes for sour cream to still make your favorite cornbread!

In this article, we will have a look at what the functions of sour cream in Jiffy cornbread is.

This way we can choose substitutes that will be able to execute those functions as well. We will also have a more in-depth look at the substitutes, their pros and cons, and how to substitute sour cream with each.

This jam-packed article will make your baking life so much easier. It is always useful to have a substitute list around the kitchen and you will be able to use this guide for many years to come.

If you aren’t familiar with this amazing product, which seems very unlikely unless you don’t live in America, Jiffy is a brand that sells baking pre-mixes.

These mixes can be used in a ton of ways to create a ton of delicious dishes. The Jiffy Corn Muffin Mix is one of their bestselling products. It’s truly a household favorite.

This mix makes your life so much easier and requires little to no effort at all.  The biggest problem with cornbread recipes is that most of the time they require sour cream.

However, not everyone wants to use sour cream, so what are the alternatives? Well, first we need to understand what sour cream does for your cornbread.

What Does the Sour Cream Do?

So, first of all, we need to have a look at what the functions of sour cream in cornbread are.

We’ve also put this together in chart form, in case you want to save it for later for easy review.

Here are some of the main functions of sour cream in baking:

It is important to know which functions the sour cream fulfills for Jiffy Cornbread to choose substitutes that can also perform those functions.

1. Sour cream definitely adds moisture to the Jiffy cornbread without thinning it too much. A wide range of substitutes can be used to perform this function, as long as they aren’t too runny.

2. Cornbread doesn’t really require creaminess, so we can rule that out as a function of sour cream for Jiffy cornbread.

3. The browning function can also be fulfilled by a wide number of substitutes, even just baking at the correct temperatures or a mixture of temperatures.

4. When you look at the ingredients list on the Jiffy Cornbread box, you will see that it does contain baking soda, and therefore you do need a substitute that has the acidity to activate the baking soda – which is why sour cream is the typical choice.

5. Flavor is an obvious function as sour cream has such a unique one. There are also tons of acidic flavors we can add to mimic that of sour creams’.

So to recap, the substitutes for sour cream in Jiffy cornbread needs to be able to add moisture, activate the baking soda, add an acidic flavor profile and naturally be able to help brown products.

Let’s take a look at some of your best substitute options:

Greek yogurt, or double cream yogurt in some countries, is the best substitute to add moisture without thinning your batter too much.

However, because of the molecular composition of Greek yogurt and sour cream, sour cream gives denser products than Greek yogurt. This is because sour cream has less casein proteins than yogurt.

Greek yogurt also has an acidic taste to it and will give you a similar flavor profile.

You can substitute plain Greek yogurt for sour cream in equal parts for all of your baked goods. If you want a more acidic taste, add a splash of lemon juice or white wine vinegar. Although, we don’t feel it is necessary.

Crème Fraiche will function in a very similar way to sour cream and Greek yogurt. It will help add moisture and creaminess without thinning your batter. This is because it is made from similar bacteria cultures that sour cream.

However, Crème Fraiche’s flavor isn’t as similar to sour cream as Greek yogurt. This can be easily adjusted by a teaspoon of acid such as lemon juice, lime juice or white wine vinegar.

Substitute the sour cream with an equal part Crème Fraiche and simply add a teaspoon of an acid like lemon juice to add that flavor.

This one is a little more unconventional and more complex to use, but if you are in a bind, it is your best alternative.

Coconut cream, NOT coconut milk, is a thick and creamy non-dairy substitute for sour cream making it great for people that are lactose intolerant or who just want to stay away from dairy.

Keep in mind, the creamy, thick part of coconut cream is what makes the best substitute.

This thick part will act in the same manner as the Greek yogurt and Crème Fraiche. It will add moisture to the batter as well as creaminess, but still, maintain a thick consistency.

But, obviously, the flavor profiles are not even close to each other. Luckily, there’s nothing a teaspoon or two of lemon juice cannot fix.

Coconut cream does require a bit more acidity added than crème Fraiche, so you can easily add up to a tablespoon of lemon juice or vinegar.

Cottage cheese is a cheese curd product, meaning it has a much thicker consistency than sour cream. It provides an extremely creamy consistency and doesn’t thin the mixture a lot (i.e. it adds moisture).

Cottage cheese is also a healthier alternative to sour cream as it is higher in fat and lower in calories.

Our final substitute is buttermilk. Buttermilk has very similar acidic flavors to sour cream. This is because the natural lactic acid bacteria ferments and creates them, similar to sour cream.

The acidity of buttermilk also means that it can activate the baking soda in the Jiffy pre-mix and thereby allowing the mixture to rise.

The biggest downside is its consistency. Although it will add moisture, be sure not to add too much buttermilk as it might thin the cornbread mixture too much.

Other than that, buttermilk will make a great substitute and is easily accessible in most areas.

Up Next: Coffee Cake Without Sour Cream

How To Store Raw Meat In The Fridge

Your website saved me from having to go to the grocery store for sour cream. An ingredient called for in cornbread (making for chili for Super Bowl Sunday). Using the cottage cheese technique. Thank you.