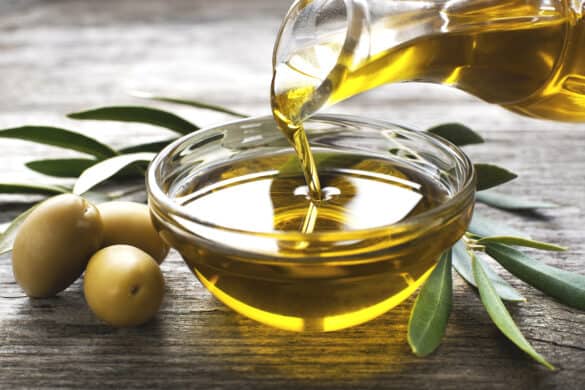 Olive oil should be kept in every kitchen. It is healthier than most other oil options, and it can cook food to perfection.

Understanding how to cook with olive oil not only helps you make use of it best, but it ensures you adhere to certain kitchen safety standards as well.

One important factor to know is whether or not it is safe to cook with olive oil on high heat.

Is olive oil flammable? Technically, olive oil is flammable, but it does not ignite or turn into a grease fire too easily. It would have to be heated to its flashpoint before it ignites, but olive oil will begin to boil or showing signs of high heat before reaching flammable levels.

There are some other factors to consider when cooking with olive oil to ensure that you do so safely. You’ll want to consider what you are cooking the olive oil with and whether there are any open flames nearby.

Once you understand the ins and outs of cooking with olive oil on high heat, you can better prevent it from catching on fire when you cook with it!

Olive oil isn’t necessarily a volatile ingredient to cook with. In order to cause a fire, olive oil must be heated to its flashpoint or sprayed in a fine mist over an open flame.

The flashpoint is the temperature at which oil can create flammable vapors and cause a fire if exposed to heat. The flashpoint of olive oil is about 410 F, but it can be lower for some varieties.

There are early indicators to look out for that olive oil is reaching its flashpoint. The olive oil will start to boil or pop. You should use this as an indication that the heat is too high, and it should then be lowered.

Still, you should be careful when cooking with olive oil on high heat.

While it is unlikely that your olive oil will catch alight, there is always a chance. It is much better to avoid that happening than having to put out a growing kitchen fire.

Most kitchen fires start because the cook is not aware of the igniting point of the oil they are using, and the oil is left to heat up unattended.

While olive oil might not burst into flames on its own if left below this temperature, as it heats up towards these temperatures, and is close to a heat source, there is a great chance of it igniting.

You need to look out for the warning signs that the olive oil is reaching these temperatures. Although this would mean it is already considerably hot, you are unlikely to reach those temperatures.

Many people assume that the smoke point and ignition point of oils are the same. After all, that is when an oil begins to smoke. But again, they are not the same thing.

The smoking point of olive oil is lower than its ignition point. Though more refined oils having a higher smoking point.

Once any oil reaches its smoking point, it is definitely time to remove it or turn down the heat, as it is becoming too hot and will begin to burn, and possibly eventually ignite.

The smoke point of olive oil is 410 F. This is lower than most other oils, as it is not as refined.

If you have a pot of hot olive oil on the stove that does start to boil, you should turn off the heat completely and allow the oil to cool down quite a bit. When olive oil starts boiling, it is way past the stage of being at a safe heat.

When you see the olive oil boiling, it is a sure sign that it has been allowed to get too hot.

Adding in any foods to boiling olive oil can cause spray back which can lead to hot oil flying all over, and even landing on you and causing burns.

You should also try not to move a hot pot of olive oil as it could spill and seriously burn you, or come into contact with a heat source and could cause a fire.

It is a good idea to keep a food thermometer handy to test when the olive oil is at the right cooking temperature. This way you can avoid it reaching the boiling stage.

Even attempting to reach the boiling point of olive oil on a home stove is considerably dangerous. It is really not a good idea to try to boil olive oil.

You do not have to remember the flashpoint, the ignition point, the smoke point, and the boiling point of olive oil exactly to know when it is at an unsafe temperature.

You can look out for other warning signs. However, having a rough idea does help you keep better control of your kitchen, and works to prevent any fires.

Cooking Vegetables In Olive Oil In The Oven

When placed in the oven, olive oil can rise up to its flashpoint, and not only does this result in burned vegetables, but if exposed to a flame or additional heat source, it could start a fire.

Avoid using olive oil in the oven, and instead, cook your vegetables on the stove with some olive oil. It will give you perfectly cooked vegetables, and greatly reduce the likelihood of a kitchen fire!

Putting Out An Olive Oil Fire

As olive oil reaches its flash point, where it starts to become more flammable, it will begin to pop and become more volatile.

If olive oil does catch alight, it can spread and grow rapidly. But don’t simply pour or dump water onto olive oil which has caught fire. It could cause the olive oil to jump out of the pan, and then spread the fire further as well.

If your olive oil does reach this point and there are flames, you should try to extinguish it with a fine mist bottle, or using a fire extinguisher.

Avoid the temptation of dumping water onto the fire, it will only grow and dangerously spread to other areas of the kitchen and home.

Here are some tips for dealing with a hot oil fire:

Should Olive Oil Be Heated?

Olive oil really does have some great health benefits if consumed in a balanced diet. Good-quality olive oil is made with the best ingredients and really is such a treat to have in the kitchen.

Due to the quality of ingredients, and the overall benefits of olive oil, many believe that olive oil should not be heated.

Here are some reasons why olive oil should not be heated, explained:

To better know which olive oil is best, and safest, for different purposes, here’s a breakdown of each type:

Extra virgin – Extra virgin olive oil is made from the first cold press of olives. It has the strongest and most pleasant flavor. It is a good choice for sautéing.

Virgin – Virgin olive oil is made from the second pressing of olives, and it has a milder flavor. It is best used in medium-heat sautéing and for pan-frying.

Pure – Pure olive oil is made either by chemical extraction or from the second pressing of olive oil, and it isn’t necessarily pure. It lacks much of the flavor of extra virgin and virgin olive oil. It is suited for use in roasting, baking, and deep-frying.

Light – Light olive oil is not necessarily lower in fat or calories. Regardless, it should be avoided as it is a combination of olive oil and a blend of other oils. You can’t be sure what it contains. It also lacks the flavor and health benefits of extra virgin and virgin olive oil.

Below is the flashpoint of the different types of olive oils:

Does Olive Oil Burn Off When Heated in the Oven?

Why Did My Olive Oil Catch on Fire?

Olive oil can catch on fire once it heats to its flash point or smoke point. Olive oil which is reaching this level will usually boil or pop. If it appears to smoke or burn, it’s at a dangerous stage and should be removed from heat.

Olive oil is flammable if it is left to reach a certain temperature. Because of this, you do have to be careful when cooking at high heats with olive oil. Just be sure to keep an eye on your cooking at all times.

Understanding the different heat points of olive oil can help you improve your kitchen safety, and make the most of it. You don’t want to waste the amazing taste and health benefits of olive oil by overheating it.

Up Next: Avocado Oil Vs Grapeseed Oil – What’s The Difference?