Home Foodsguy Hunan Chicken Vs General Tso – What’s The Difference?
FoodsguyThis vs That 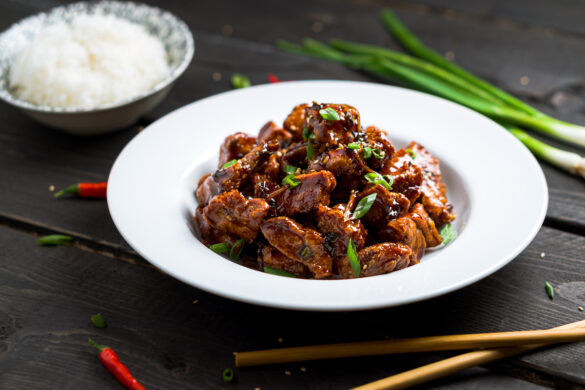 If you live in the United States and are a fan of Asian food, you have most likely seen or tasted Hunan chicken and General Tso’s chicken. While these two chicken dishes look similar, they are certainly not the same.

This article includes a detailed comparison of these two popular Chinese American dishes.

Continue reading to learn how the ingredients, preparation, and the overall flavor of these Asian chicken dishes differ. You will also find out which one is spicier!

What Is Hunan Chicken?

Hunan chicken is one of the most popular dishes in Hunan cuisine. Another name for Hunan cuisine is Xiang cuisine.

Additionally, unlike Sichuan cuisine, sweet and spicy flavor combinations are not very popular in Hunan-style dishes.

Restaurants featuring Hunan-style cuisine appeared in the US starting from the 1970s. In the 1940s, a group of Chinese chefs fled from the Hunan province to Taiwan and then moved to the US.

Since then, Hunan-style dishes, including Hunan chicken, have become popular foods in Asian bistros and restaurants.

So, what is Hunan chicken?

Hunan chicken is a dish featuring velveted pan-seared chicken and various vegetables in a delicious savory sauce that contains chilies for heat.

What Is General Tso’s Chicken?

General Tso’s chicken, also known as General Tao’s (or Tsao’s) chicken, is a sweet-spicy chicken dish and a staple in Chinese American cuisine.

The dish is named after a Hunanese general, Zuo Zongtang. Though this was a real person, the military leader never made or ate the dish now known as General Tso’s chicken.

There are a few stories regarding the origin of General Tso’s chicken. A few people claim to be the author of the dish.

It is commonly believed that the dish was created in Taiwan in 1955 by Peng Chang-kuai, a Hunan cuisine chef. Chef Peng named his dish after the famous Hunanese general.

General Tso’s chicken got to the states through Chinese restaurants that opened in New York in the 1980s.

Aside from General Tso’s chicken which looks quite similar to Hunan chicken, you can also make General  Tso’s shrimp, tofu, salmon, and more!

While Hunan chicken and General Tso’s chicken are two very popular Asian chicken dishes, they can be made with beef too using the recipes.

Hunan Chicken Vs General Tso – What Are The Differences?

Hunan chicken and General Tso’s chicken may look similar at first sight. But these two Asian dishes have some key differences.

We have compared and contrasted all aspects of these two dishes to find out what makes these popular Chinese American dishes different and what are some similarities they share.

One of the main things that these two dishes have in common is obviously the chicken. Chicken cuts popularly used for these dishes are boneless and skinless chicken breasts and thighs.

Another similarity is that you can use various vegetables to make Hunan chicken and General Tso’s chicken, including broccoli, carrots, mushrooms, and bell peppers.

As both dishes belong to the Asian cuisine, it is not surprising that the recipes for Hunan chicken and General Tso’s chicken both call for ginger, garlic, soy sauce, oyster sauce, sesame seeds, and rice vinegar.

In addition to the many ingredients that Hunan chicken and General Tso share, each dish has an ingredient that the other one doesn’t. And these are the ingredients that determine the key differences between these two Asian dishes.

A staple ingredient in Hunan-style cooking is doubanjiang. This is a fermented chili bean paste that has a savory spicy flavor. It is the ingredient that provides the spiciness of Hunan chicken.

Some recipes suggest using chili peppers instead of this paste. While this works and makes the recipes more accessible, many cooks believe that doubanjiang is what provides the characteristic flavor of Hunan chicken.

As for making General Tso’s chicken, a key ingredient you will need is sugar as the chicken should ultimately have a sweet flavor with a spicy kick. You may use white or brown sugar. Alternatively, you can use honey to sweeten the chicken.

Hunan chicken and General Tso’s chicken share the same main ingredient. However, you need to cook the chicken differently for each dish.

For Hunan chicken, the chicken pieces are coated in cornstarch and seared in the pan until they are golden brown.

This is essentially the process of velveting the chicken. Velveting is a Chinese technique for keeping meat for stir-fries tender and juicy.

The ingredients used for velveting the chicken may differ from recipe to recipe and include egg whites, vinegar, cornstarch, and baking powder. Some recipes suggest marinating the sliced chicken first.

For General Tso’s chicken, you batter the chicken and then deep-fry it. The deep-fried chicken is then tossed in the sweet-spicy sauce.

One of the key differences between these two chicken dishes is their overall flavor. Hunan chicken is quite spicy and has notes of tanginess. The spiciness of Hunan chicken is often referred to as “dry heat”.

General Tso’s chicken, on the other hand, has a sweet-spicy flavor.

Hunan Chicken Or General Tso: Which Is Spicier?

Hunan chicken tends to be spicier than General Tso chicken. The spiciness of Hunan chicken comes from the hot doubanjiang sauce and dry red chillis used to make the sauce.

The sauce for General Tso, on the other hand, often contains only red chili peppers or chili paste.

With this said, the level of heat of both dishes is totally customizable. You can always enhance the spiciness or tone it down to make these Asian dishes family-friendly. In general, though, there is less chili in General Tso’s chicken.

So, you can always expect General Tso’s chicken to be less spicy than Hunan Chicken.

In other words, they Americanized Hunan cuisine, toning down the spiciness and enhancing the sweetness.

For this reason, if you try Hunan chicken in China, you may find it to be spicier than the Hunan chicken you get in Chinese restaurants in the US.

Here are the key differences between these two Chinese American dishes at a glance.

Hunan chicken and General Tso are both great for lunch and dinner.

You can serve both dishes over a bed of rice. While rice is the most common side dish for these chicken dishes, you can serve them with noodles too.

Which One Is Healthier: Hunan Chicken Or General Tso?

Considering the fact that the chicken for General Tso is deep-fried and pan-seared for Hunan chicken, Hunan chicken is a healthier choice. It is also a better source of protein as it also contains bean paste.

Both dishes are very high in sodium. A one-cup serving of Hunan chicken contains a little over 1000 mg of sodium.

Only five pieces of General Tso’s chicken contain over 1000 mg of sodium too. This is a lot considering that Dietary guidelines recommend Americans to not consume more than 2300 mg of sodium a day.

Whenever you have these Asian dishes for one of your meals, try to keep the rest of the foods you eat throughout the day low-sodium.

You can use different vegetables to enhance the nutritional value of both chicken dishes. Broccoli, carrots, bell peppers, and mushrooms go perfectly with Hunan chicken and General Tso.

You can also use zucchini and eggplant, as well as top the dishes with scallions.

If you’ve been wanting to try your hand at making your own General Tso’s chicken from scratch, here’s a great video on how to do so from the folks over at Babish Culinary Universe!

Up Next: Best Beef Cuts For Slow Cookers