Home Foodsguy Honey Vs Molasses – The Real Differences
FoodsguyThis vs That

Honey Vs Molasses – The Real Differences 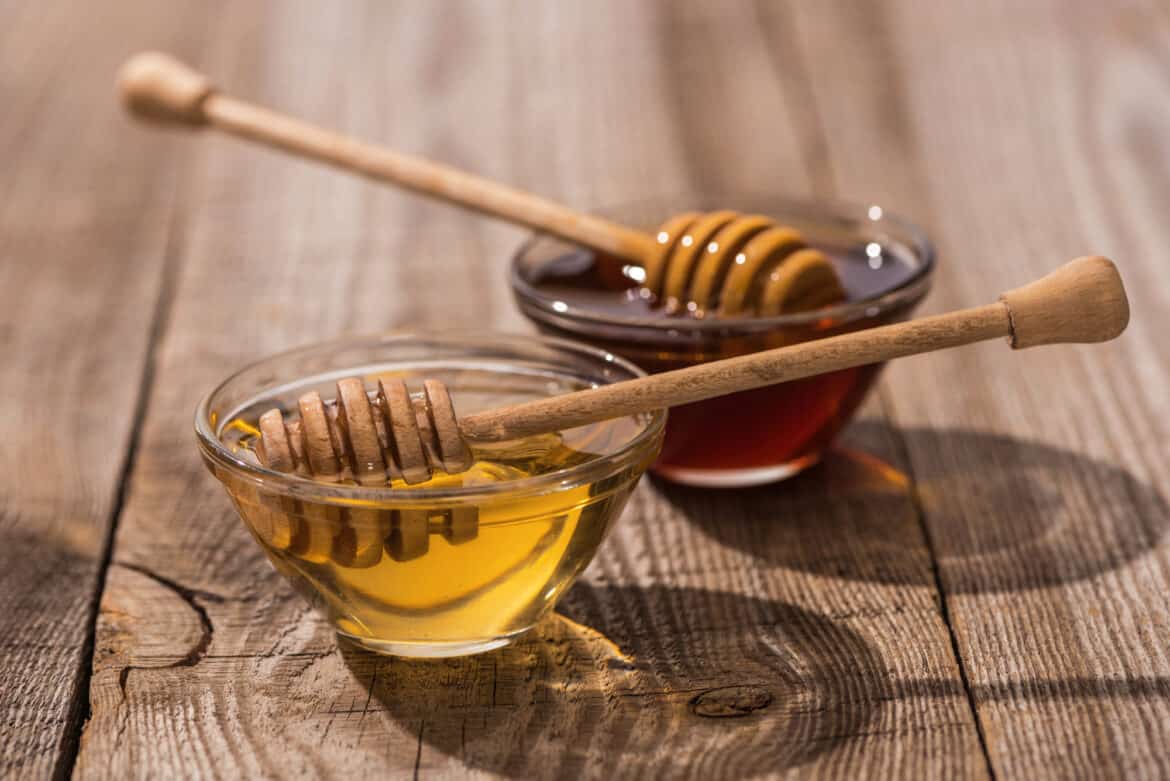 Honey and molasses are two very popular sugar substitutes that are sometimes mistaken for one another. Those who do know how to tell the difference still may not know what sets them apart besides flavor and color.

What’s the real difference between honey and molasses? Honey is a product of nature, made from nectar by bees and collected by humans. Molasses, on the other hand, is entirely made by humans as a byproduct of the sugar industry. They are both very sweet, though honey has a lighter, more floral flavor and molasses has a warmer, smokier taste.

Honey and molasses are both used frequently in baking and sweetening beverages, as well as occasionally for medicinal purposes.

There are a few other similarities and differences between honey and molasses, which we’ll cover in depth in the following article.

Honey is one of the oldest and most natural sweeteners that humans and animals alike have been enjoying since the dawn of time.

Honey is a thick, sweet syrup made by hard-working bees, housed in honeycomb-filled hives, and foraged by all creatures with a sweet tooth.

As long as it’s pure, unadulterated, and not exposed to air or moisture, it can stay fresh indefinitely.

There are many different types of honey, varying depending on the type of flowers the bees frequent to how the honey is produced from a commercial perspective.

Honey has a wide variety of health benefits and can be used in many different ways, not all of them food-related.

How is Honey Made?

Most of us know that honey is the sweet, golden, delicious syrup that goes so well with tea, toast, and dessert, but we don’t always question where it comes from. What is honey made of? How is it made?

Bees gather nectar from flowers and store it in an extra stomach they have to bring it back to their hives. During this transportation, it mixes with very specific enzymes that make it essentially spoil-proof.

Once the bees are back at their hive, they deposit the enzyme-fortified nectar, which is now a liquid, into a honeycomb. Over time, with help from the speedy fanning wings of the bees, enough water evaporates from the liquid to turn it into the thick syrup that we know as honey.

There are two main ways that honey is differentiated. It is either based on the type of flower it is made from or how it is processed.

The type of flower from which bees gather their nectar can change the flavor, color, consistency, and nutrition of the honey. Some of the most popular types of floral honey varieties include:

Those are only a few of the most popular types of honey worldwide.

Honey is also differentiated by whether it is raw or processed. Raw honey is strained after it’s collected from the honeycomb to remove debris and pieces of beeswax, but otherwise, it’s completely natural.

Most honey that is available commercially goes through more processing to remove potential contaminants and theoretically extend the shelf life.

It’s debated whether or not this is necessary, as honey itself has been used as a natural preservative in some cases because it saves so well on its own. But, unlike most foods, honey cannot be frozen and saved for later to extend its shelf life.

Some honey is even ultra-filtered to give it a more clear appearance and removing even trace amounts of pollen, which can be an allergen.

These processes are done to make honey more appealing to consumers, though they can also dramatically reduce the nutritional content of the honey, removing antioxidants and beneficial enzymes along with the debris.

The flavor of honey does vary slightly depending on the type of flower it is made from. At its core, honey is sweet and has a depth of flavors that can range from butterscotch or caramel to fruity or floral.

The more processed varieties of honey lose some of their natural flavors and simply taste sweet, whereas raw honey will take on the fragrant qualities of the flower the bees gather their pollen from.

What Is Honey Used For?

Honey is, first and foremost, used to delight your tastebuds. It is a sweet syrup, used either for its own flavor or as a more natural alternative to sugar.

Many people enjoy drizzling honey over their toast, breakfast cereal, or baked goods. Honey is often used to sweeten tea and occasionally coffee or other hot beverages as well.

Since it blends well into even cold liquids, it’s also very tasty when used to sweeten cold beverages.

Some bakers also use it in their recipes. However, if you’re trying to substitute honey for sugar, you should know that it’s generally considered sweeter than sugar and it has a lot more liquid, so it can throw off the moisture balance.

Besides sweet foods, honey can also be used to make a variety of marinades and savory recipes like our honey garlic chicken marinade, or in sauces like honey mustard to balance out the salty flavors.

Aside from eating and drinking honey, it’s also used for a variety of medicinal purposes. Raw honey is naturally antibacterial, antifungal, and antiseptic, as it contains hydrogen peroxide.

It has been used as a natural method to treat wounds by preventing infection and encouraging healing.

Molasses is a very dark, very thick syrup that is essentially a byproduct of the sugar-making process.

Similar to honey, there are a few different types of molasses.

How Is Molasses Made?

To make sugar, either sugar cane or sugar beets are crushed to extract the juice. That juice is then boiled down until it forms sugar crystals.

The byproduct, molasses, is the liquid that is removed from the juice to allow the sugar to dry into crystals.

Sugar often goes through multiple sessions of boiling. Each time, the leftover liquid makes a different type of molasses.

The liquid that is collected from the first boiling of the sugar juice is called light molasses. This is the sweetest version of the product, but also the lightest in flavor and color.

It’s the most common type of molasses used because it acts as a great sweetener without affecting the flavor of the recipe too much.

With each subsequent boiling process, the resulting molasses become darker, thicker, and more bitter. Dark molasses is usually from the second boiling, and it is well-balanced between sweetness and bitterness.

At the very end of the spectrum is blackstrap molasses, which is made from the third boiling or higher and is almost burnt in flavor. It’s very thick, extremely dark, and has the most bitter undertones of any molasses.

It’s often compared to coffee in flavor, though it’s still somewhat sweet. Blackstrap is the least commonly used type of molasses for human consumption because the flavor is very intense.

The other consideration you need to know about when choosing a type of molasses is whether it is sulfured or unsulfured. Each bottle should be labeled.

Sulfured molasses uses sulfur dioxide as a preservative, which can extend the life of the sugar, but many people find that it leaves a chemical taste in their mouth which isn’t pleasant.

Each type of molasses will taste different, but overall, molasses has a sweet, smoky flavor. The sweetness is very similar to that of sugar, which makes sense because it’s made from the same original ingredient.

The smokiness comes from the boiling and cooking process. The darker the molasses, the stronger the smoky flavor will be until it becomes very robust and even bitter.

The lightest molasses will taste the most similar to a simple syrup.

What Is Molasses Used For?

Molasses is often used for baking or to add sweetness and a smoky flavor to sauces as well as beverages. Molasses pairs very well with other warm flavors, such as ginger, cinnamon, and nutmeg.

It also adds an earthy depth to rich sauces and meat dishes, so it’s frequently used in marinades and savory baked goods.

Many other beverages use molasses for its unique flavor and added sweetness, especially drinks inspired by Jamaican or Caribbean culture and ingredients.

There is some evidence that suggests molasses may have further medicinal benefits as well. It is a good source of a variety of minerals and antioxidants, so it may help maintain strong bones and a healthy immune system.

Traditionally, molasses has also been used as a digestive aid, so it’s sometimes added to coffee or tea to ease an upset stomach.

Can You Substitute Honey for Molasses?

If honey and molasses are both used as sugar alternatives, can they be substituted for each other in a recipe? Yes and no.

Yes, you can substitute any sweetening agent for another in a recipe, but the flavor will change dramatically, especially if you’re swapping honey and molasses.

Honey is very sweet, though with light, fruity, caramel notes. Molasses, on the other hand, is also very sweet, but it is smokier and deeper in flavor.

The type of molasses you use will make a bigger difference to the overall flavor than the type of honey would. The most equitable substitution would be honey for light molasses, but it would still be noticeably different.

Up Next: Maple Syrup Vs Honey – What’s The Difference?

The Best Substitutes For Rice Syrup