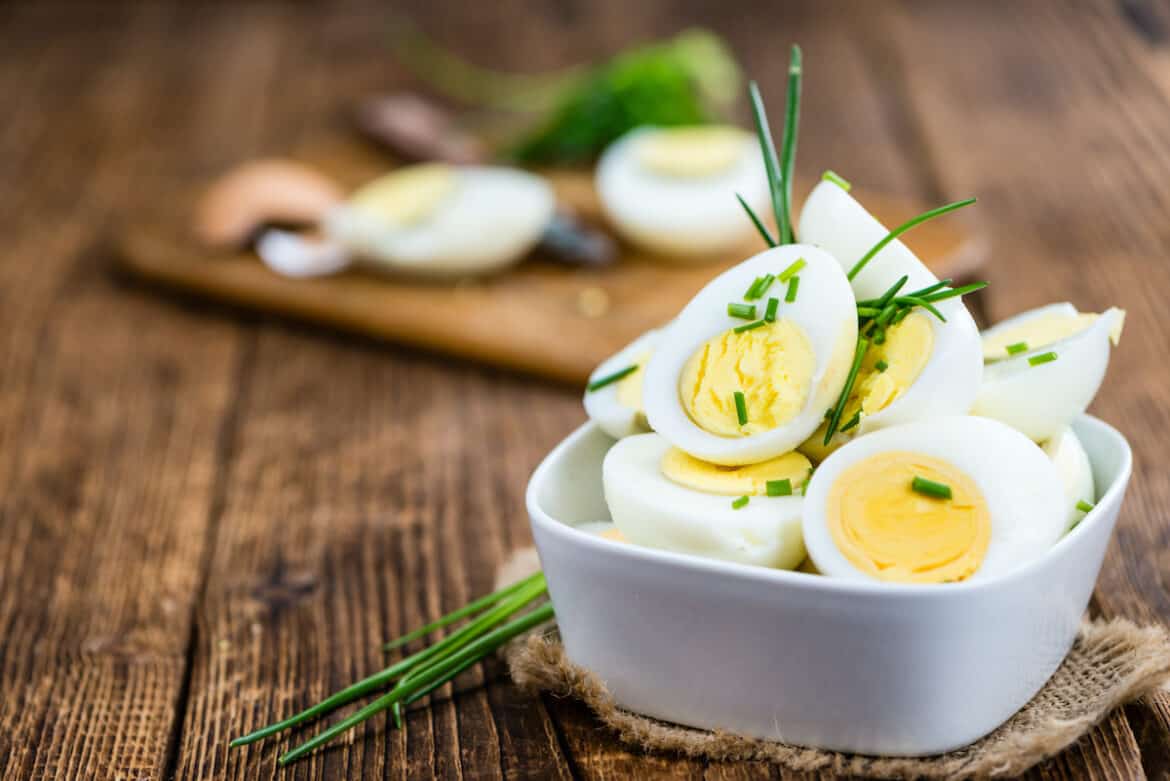 Hard-boiled eggs can be a great source of protein! A lot of people like to eat them for breakfast or as a protein-filled snack throughout the day.

We all enjoy our boiled eggs in different ways. We might even prefer different types of boiled eggs like soft, medium, and hard-boiled. There is a fine art to boiling an egg just right!

We know that raw eggs can be dangerous to eat because of salmonella. There are also some concerns about eating overcooked eggs as well.

In this guide, we will walk you through the question of whether or not hard-boiled eggs will hurt you.

We will talk about what you might expect, the details you should know, how they could potentially make you sick if you eat too many, and more!

Keep reading to learn more about whether or not overcooked hard-boiled eggs can hurt you.

Let’s start by talking about hard-boiled eggs. This is the best way to understand just what could go wrong when it comes to an overcooked egg.

Generally speaking, you make a hard-boiled egg by cooking a fresh egg in its shell in boiling water. The cooking times vary.

A hard-boiled egg is cooked the longest in order to get the yolk inside hard. Much like a fried egg with a hard yolk is cooked to “over hard”, right?

The longer the eggs are boiled, the more the yolk inside cooks. For a hard-boiled egg, the intention is to get both the yolk and the egg white hardened inside of the shell.

How hard-boiled you prefer your eggs really just depends on your preferences. A hard-boiled egg is great for protein, lower in calories, and is less likely to expose you to salmonella in the end.

Have you ever cooked a boiled egg and then opened it up to a gray or green color? Maybe you even noticed a sulfuric smell when you did? This is where the concern comes in when a hard-boiled egg ends up overcooked.

Will It Make You Sick?

In general, it’s not recommended that you eat overcooked eggs primarily because of the sulfur content. You can eat them, and in truth, you probably will not get sick if you eat one or two of them.

However, you should be aware of what is in them and the possibility of getting sick if you were to eat too many.

If your egg is overcooked, you can usually tell by a gray or green color on the outside of the yolk. Typically, it’s just a bit of discoloration but if your eggs are way overcooked, the whole yolk could take on this color.

Some slight discoloration isn’t too worrisome unless you plan to eat a whole lot of eggs at one time.

However, there are risks to eating these and that’s what we’re here to discuss. It’s simply important that you really know what you’re getting into.

When you overcook your boiled egg, the yolk starts to develop iron sulfide. This is what makes it green or gray in color. You might also notice a sulfuric scent as well.

Iron sulfide is a mineral and while it typically comes from rocks, it can also come from an overcooked boiled egg. Interesting concept, right?

What happens is the iron in the egg is compounded with hydrogen sulfide as the yolk cooks.

As we mentioned earlier, the longer it cooks, the harder the yolk cooks. This is also what leads to the beginnings of iron sulfide compounding.

The longer that egg is cooked, the more iron sulfide is created in the yolk.

Iron sulfide is specifically said to be toxic by ingestion. This is why it is not recommended to eat eggs that have iron sulfide in them.

In other words, it’s not recommended to eat an overcooked hard-boiled egg. If you do eat them, you should only eat 1-2 and certainly not more than that.

You might also make your decision based on just how much iron sulfide they have.

For example, if you notice just a little bit of gray on the yolk, this is a pretty low level of iron sulfide. If the entire yolk is grayish-green, this is significantly higher levels.

The Risks Of Eating Iron Sulfide

In short, you really shouldn’t eat overcooked hard-boiled eggs. However, if you do decide to go ahead and risk it, we want you to be aware of the possible consequences.

The good news is that there are no reported deaths from eating overcooked hard-boiled eggs. In fact, you might even be able to eat a small amount and never even experience a side effect!

The challenge comes in knowing how much is too much. You must consider whether or not it is worth the risk to eat one or two eggs with a little bit of iron sulfide or not.

The risk of consuming an overcooked hard-boiled egg is that you are ingesting iron sulfide into your body. It could potentially make you sick because this substance is rated as a toxic compound.

If you’ve been eating your overcooked boiled eggs all along and never had an issue, that’s great! The problem is that it doesn’t mean you won’t experience an issue at some point from ingesting iron sulfide.

As we mentioned, there have never been any deaths reported from consuming these eggs but there is certainly a risk of illness and additional side effects that very well may not be worth the bit of protein.

What Should You Do?

We recommend throwing the eggs out if you overcooked them. It’s much safer that way.

If you do choose to go ahead and eat your eggs, just be sure you don’t eat too many of them and end up getting food poisoning. It’s simply not worth the risk!

When you make hard-boiled eggs, we recommend that you time them carefully to get them boiled just right without overcooking them. There are many recipes out there that you can follow to cook them properly.

Remember that a little hint of gray might be alright but you want to be very careful about how much you risk consuming and understand the risks of doing so as well.

We hope that you find this guide to understanding whether overcooked hard-boiled eggs could be dangerous to be a useful resource.

There are certainly some things to know and be aware of but if you eat a few eggs, you will most likely be ok.

Take a look at these common questions and answers for some additional information that could be useful as well!

How long are boiled eggs good for?

Once you’ve cooked boiled eggs, they will most likely stay good for about a week. You do need to make sure that you store them properly in the refrigerator but as long as you do so, your eggs should last several days.

Why does my hard-boiled egg stink?

If you’re noticing an odd smell from your hard-boiled egg, this is most likely an indication that it is overcooked.

Typically, it will have a slight sulfuric smell if it is overcooked. You may also notice some discoloration. This comes from the iron sulfide released in the yolk.

Why do overcooked eggs turn green?

That green or gray discoloration happens because of the iron sulfide that has taken root with the yolk. An egg that is extremely overcooked might even turn dark gray or green.

This is a chemical reaction because the iron paired together with hydrogen inside the egg, causing it to turn colors.

Remember that this discoloration is a sign that your egg is overcooked and contains iron sulfide. It may not be safe to eat as iron sulfide is considered to be toxic when ingested.

Up Next: 7 Best Ramen Pots

Gelatin Sheets – How To Use Them & What To Buy