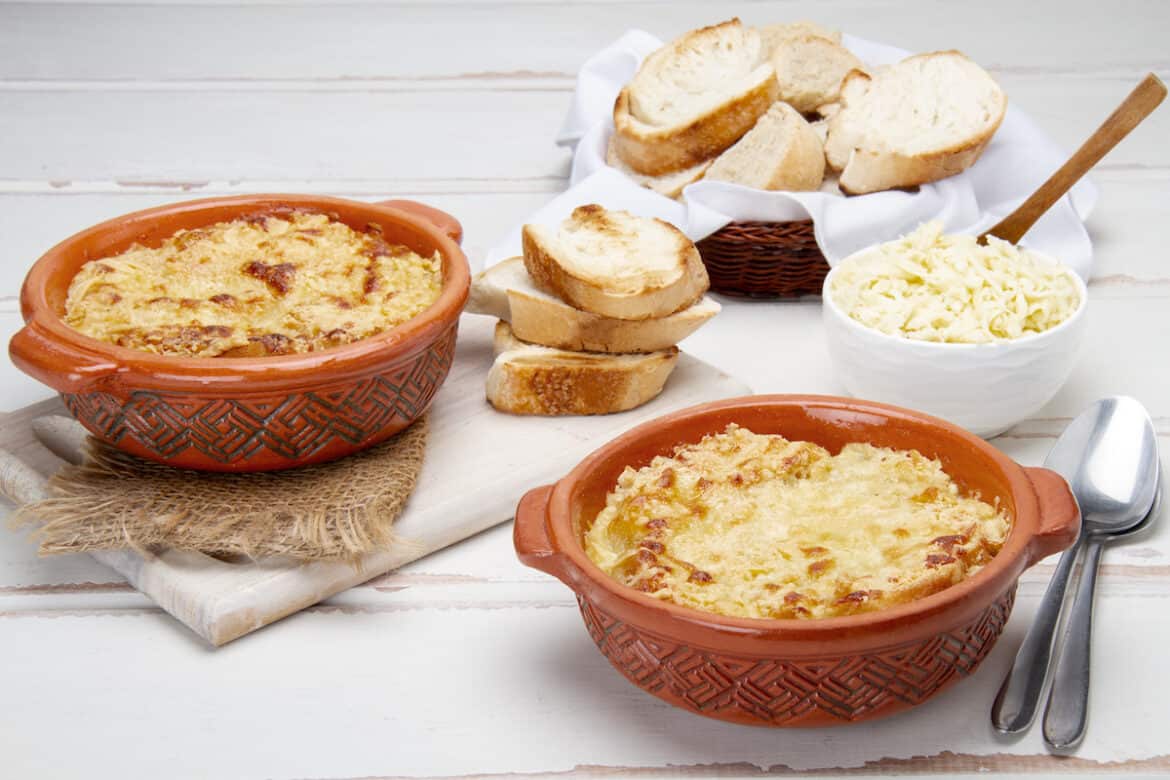 At some point, almost all foodies are interested in learning how to prepare French onion soup. It’s a classic recipe that has stood the test of time and gone through many variations to become what we recognize today.

French onion soup originated in France in 1135 as a “poor man’s soup” made by street vendors. The ingredients included cabbage, carrots, onions, all mixed in a simple broth.

Later on, King Louis XV took credit for inventing the soup after returning from hunting, saw that in his cupboard there were only onions, butter, and champagne, and decided to combine them. This supposedly contributed to the soup’s rise in fame.

In addition to sharing nice food stories and anecdotes about where a dish came from, we want to teach you how to make the best French onion soup.

In our French soup recipe, wine is omitted. We believe that the heart of good onion soup is the beef broth and onion compote. If you have a good broth and have caramelized the onions properly, your soup will be great.

Also, if you’re going to be serving french onion soup, you should really have the right bowls for it. These classic ceramic ones from Amazon are my favorite.

How To Make Beef Broth For French Onion Soup

We highly recommend making beef broth at home instead of using a store-bought broth. However, if you are short on time or don’t want to make your own broth (and we don’t blame you), then here is our favorite beef broth that we commonly use in our kitchen.

For a good homemade beef broth, beef bones are essential.

The best pieces of meat to make this soup are cross-cut shanks. The slow cooking of this meat in water with vegetables and spices guarantees an extraordinary broth.

With that said, here’s everything you need to include in a tasty beef broth:

Here’s how to make the best beef broth at home:

Some people suggest that onion soup is made with stale bread, but we disagree. Onion soup should be made with fresh, toasted bread.

Making a dish like this takes work, and it’s not worth spoiling the soup using stale cheese or bread from the day before.

The last point before going to the stove, the onion must be caramelized. It is not complex, but it takes time, so be patient.

How To Make French Onion Soup Without Wine

Recipe is down below!

Step 2: Chop up the carrots and onions and add them to the pot. Saute them for a few minutes.

Step 3: Add the broth that you’ve either pre-made or purchased along with the meat and herbs. Cook for 3-4 hours.

Step 4: It’s time to caramelized the onions! Combine everything for the carmelized onions (ingredients in the recipe card below) and let it cook for 2 hours.

Step 5: After the soup base is cooked and the onions are caramelized, divide the soup and onions into equal portions, place the bread and cheese on top of the bowls.

Step 6: Broil everything in the oven for about 5 minutes, keeping an eye on it so it doesn’t burn.

Melt the butter in a saucepan over low heat, then add the bay leaves, peppercorns, and onions.

Stir well until all the onion is smeared with butter.

Put on a lid and cook over low heat for about two hours. It should be turned with a spoon every 30 to 40 minutes.

After two hours, the onion will have released its sugars and a soft compote of onions will have formed.

While the onions are caramelizing, make the broth.

For this, you only need to peel the vegetables and cut them into large pieces.

Pour the oil into the bottom of the pot, wait a couple of minutes until it is hot, and add the onions and garlic.

Stir fry for a few minutes and then add the carrot, bell pepper, and celery. Continue cooking for a few more minutes.

Incorporate the meat in pieces, the parsley, the bay leaf, and the peppercorns.

Fill with 8 cups (two liters) of water and cook for approximately two to three hours.

Turn off the stove, let it cool and strain the broth.

Add the salt to the broth to your liking. Reserve the rest of the ingredients for another preparation.

Add about a cup and a half of broth to each bowl.

Put two slices of bread in each cup, top with a mixture of Parmesan and Gruyere cheese, and bake in the oven for 5 minutes.

Up Next: Beef Broth Vs Beef Consomme – What’s The Difference?

Can You Freeze Butter Chicken? – The Best Way

Can You Freeze Shredded Mozzarella Cheese?