15 Foods That Start With Q 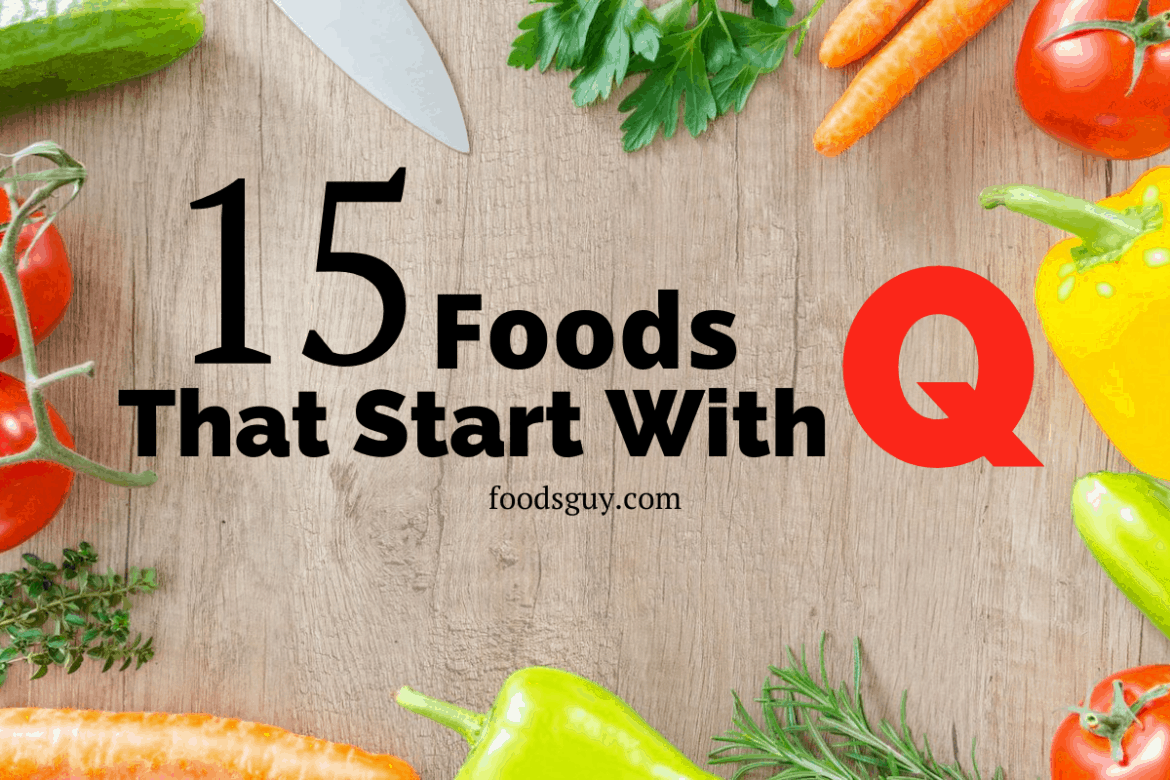 It’s always fun to learn about new foods that you can try in a fresh recipe, but foods that start with Q may not have made their way to your radar yet.

In fact, most people scouring the internet for this unique search phrase are trying to win a quiz, fill in a crossword puzzle, or prepare for a food-focused trivia contest.

Whatever your reason for wanting to learn about foods that start with Q, this list of 15 will give you a great start.

15 Foods That Start With The Letter Q

Qeqorani are truly unique small potatoes. They are roughly oblong like a conventional potato but they’re covered in deep-set eyes that create knobs and bumps over the entire tuber.

The other curiosity is the color. The skin is tan with purple undertones and the flesh inside is cream colored and thoroughly marbled with purple.

These potatoes are native to Peru and are rarely found outside of Latin America. They have a floury, dry texture that cooks up soft and fluffy. The flavor is deep and earthy, with a slight nuttiness to them.

There are a nearly infinite number of pasta types in the world. If you’re interested in trying to make fresh, homemade pasta and want it to look elegant and impressive without requiring a lot of time and effort, quadretti might be a great starting place for you.

Quadretti pasta are simple, small squares of pasta, about the width of a linguine noodle. Because they’re so small they are often made from leftover pieces of pasta dough. They make fantastic additions to broth-based soup.

Quahog is a hard-shelled clam native to the East coast of North and Central America.

There are different sizes of hard clams, each of which have a unique name including countnecks, littlenecks, and topnecks. Quahogs are the largest of the species, also sometimes called chowder clams. They have tough meat which is more enjoyable in a chowder, though they are also often processed into clam cakes or used to fill out other dishes made with smaller clams.

Clams are commonly affected by “red tide,” a toxin that can be deadly to humans, so it’s important to be very careful about digging for your own clams.

Quail are a common game bird that is also sometimes domesticated as poultry birds. Their flesh is tender and similar to duck, with darker meat and stronger flavor than chicken. The birds are small and so delicate even their bones are edible.

Some quail eat a diet high in hemlock, which can be toxic to humans, so it’s safer to consume quail meat if you know exactly where it comes from and what it ate.

Interestingly, only specific species are considered Kosher, so if you follow Orthodox customs, the only type of quail that should ever be on your menu is the Cotunix Coturnix, a common European variety.

Quail eggs are gaining in popularity because, though they’re small, they’re a powerhouse of nutrition. A single egg contains about 14 calories, no carbs, and 1 gram each of protein and fat. There is also several essential vitamins and minerals, notably Vitamin B-12 and Iron.

Oddly enough, quail eggs are being researched for unique antibodies that may serve as a treatment for Salmonella food poisoning.

Quandong are wild Australian fruit about the size of large cherries, and a similar bright red color. They have a sweet, tangy flavor that makes Quandong pies the favorite food of the festive season.

Quandong trees are drought resistant, ideal for growing in Australia, and the fruit covers the tree. Luckily, little fruit goes to waste as it can be enjoyed eaten raw, dried, stewed, or cooked and is frequently used for medicinal purposes.

The seeds of the fruit can have the essential oil extracted or made into a paste which is said to be great for toothaches or sore gums.

Quark is a product made from fresh dairy, similar to cottage cheese or other varieties of curd cheese.

The milk is soured and then warmed and carefully curdled. Once it’s deemed the perfect consistency it will be strained and sometimes have a small amount of rennet added to it to help thicken the cheese.

It is served white and unaged, usually with no salt added. It has a chewy, meaty texture much like cottage cheese and a light, fresh flavor. It’s often used for making cheesecake and other desserts.

Quassia is a type of plant, sometimes called bitter-ash, that is used primarily for its medicinal purposes and for flavoring food.

It can be used to treat worms, encourage appetite, and relieve a variety of digestive issues. It has a bitter taste which is commonly used in the food industry to flavor soft drinks, tonics, and gin-based beverages. It can also replace hops in beer brewing and add a depth of flavor to baked goods.

It is a laxative, however, so it should be used in moderation.

If you’re a fan of Mexican cuisine, queso is probably on your list of favorite foods. The literal translation of queso is cheese, however, when used as a noun with no other qualifier, it generally refers to a melted, spicy cheese dip.

Queso may be served with tortilla chips for dipping or slathered over chili in the popular dish, chile con queso.

You may also find queso fresco, which is Spanish for fresh cheese. This is a soft, solid white fresh cheese with a light flavor that slightly tangy and salty. Queso Blanco is another popular type of Mexican cheese, though it’s made with lemon juice or vinegar to acidify the cheese.

Queen apples are a crisp and juicy variety from New Zealand. They are sweet, but not overly so. Instead, the flavor is lightly enhanced by subtle flavors of banana and pear. They’re a cross between Gala apples and Splendor apples.

Though they’re grown almost exclusively in New Zealand, they’re particularly popular in the Asian market, probably because of the nearness of exportation.

Queen apples are great for juicing and desserts, though they’re also delicious eaten fresh from the tree.

Queen Forelle pears, often simply called forelles, are the smallest variety of pear you can find. They have the standard bell-shape with a short neck and a small, round base. Their bright yellow skin has red freckles and the flesh is crisp and juicy.

Because of how small they are, they’re not the best pear for cooking, but they have a flavor and texture that is a perfect addition to salads or just for snacking on.

Queen Tahiti pineapples look and taste like most other pineapples, though this particular variety is grown so prolifically throughout Tahiti and it’s sister island, Moorea, that it’s one of their most cultivated plants.

Queen Tahiti pineapples have a strong, fruity fragrance and sweet, juicy flesh that makes it very popular for juicing. The juice is also used for making wine. Of course, these pineapples can also be eaten raw or grilled.

Quince is a very unique fruit that grows across Turkey and southeast Asia.

The fruits have bright yellow skin, sometimes covered in fuzz, and highly irregular shapes, sometimes looking like a lemon, other times like a bell pepper or pear.

Quince has an odd, spongey texture that is surprisingly firm. When raw, it is so astringent that they’re considered inedible.

When quince is stewed with sugar, however, it releases an aroma that is equal parts vanilla, apple, and citrus fruit. When cooked like this it makes a great filling for pies or tarts, a sweet syrup, or a very versatile sweet paste.

Quinine isn’t technically a food, though it is used as a bitter flavoring agent popular for tonic water, which can then be used for a variety of other purposes. If gin or other bitter, citrus-flavored beverages are your social drink of choice, you’ve probably had quinine.

The compound is extracted from the bark of a chinchona tree. Traditionally it was and still is used medicinally to treat malaria.

Quinoa is often cooked and eaten like a grain but it’s actually a seed. It’s become very popular in recent years because it’s naturally gluten-free and high in protein, providing all essential amino acids and making it an attractive food for vegetarians and vegans.

Quinoa has a nutty flavor and fluffy texture that retains a bit of crunch. Depending on how it’s cooked, it may be fluffy, chewy, or creamy. With the right recipe, it can even be all three!

Quinoa is equally delicious served hot, similar to rice or barley, or cooled and made into a salad or filling for a wrap.

Up Next: Can You Reheat Quinoa? – The Best Way

How To Defrost Beyond Burgers In The Microwave

How To Sweeten Greek Yogurt (11 Ways)

Do Coke Icees Have Caffeine?

What Is A Chicken Oyster?