Home Foodsguy Cotija Vs Feta – What’s The Difference?
FoodsguyThis vs That

Cotija Vs Feta – What’s The Difference? 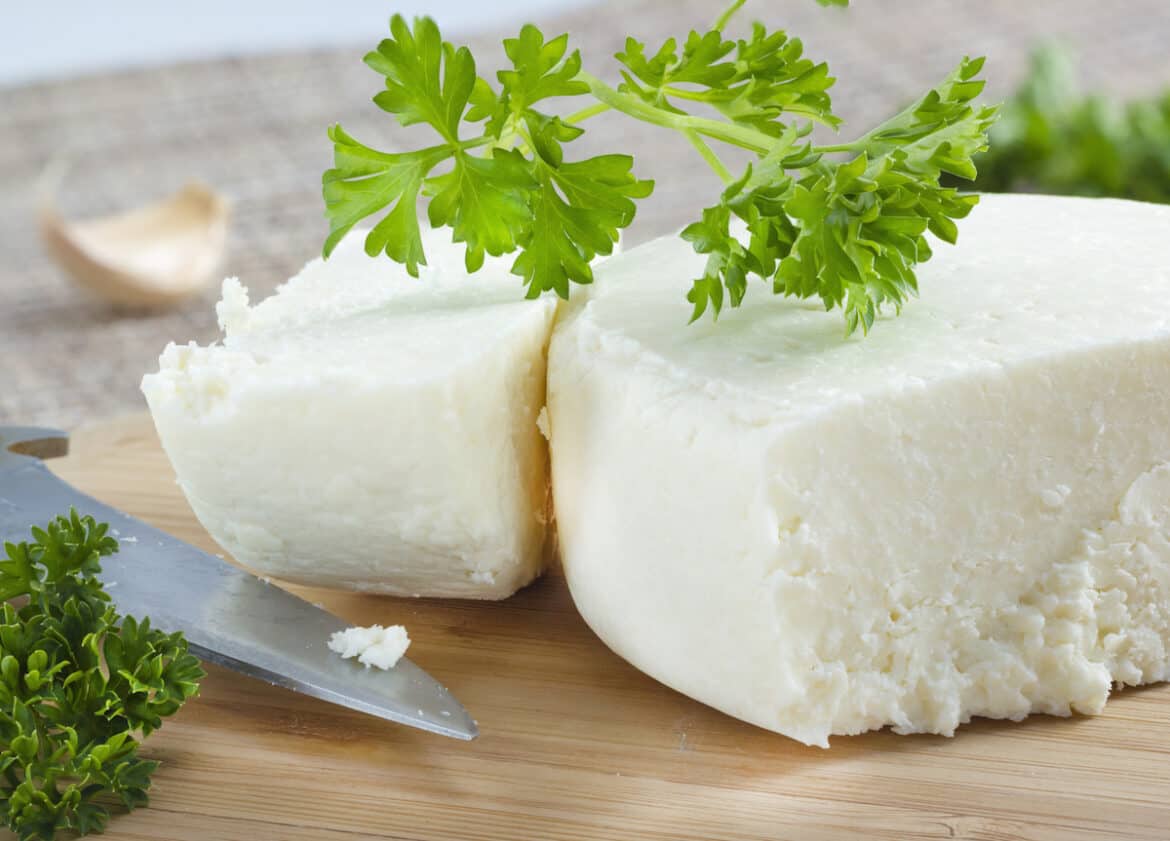 Mexican cotija and the famous Greek feta have a few similarities, such as their similar texture and appearance, but they stop there.

Continue reading to learn more about these two cheese varieties, how they are made and used, and whether you can substitute cotija with feta cheese.

Cotija and feta cheeses come from different parts of the world. Feta is a Greek brined cheese variety. It is the cheese used in the world-famous Greek salad. Cotija is a Mexican cheese coming from the town of the same name.

One of the main differences between cotija and feta is that cotija is made from cow’s milk while feta is traditionally made from sheep’s milk or a combination of sheep’s and goat’s milk.

How Cotija Cheese Is Made

The traditional way of making cotija cheese is with raw milk, salt, and rennet. The latter is an enzyme widely used in cheese making.

When you add rennet to the milk, it causes the casein, i.e. the protein in milk, to solidify. This is the part when the curds separate from the whey.

The curds are then milled and pressed to form large cylinders. Cotija cheese is aged for at least 12 months.

How Feta Cheese Is Made

As we have already mentioned, feta cheese is made from sheep’s milk or a blend of sheep’s milk and goat’s milk.

The goat’s milk shouldn’t be over 30% of the mixture. This is, however, the traditional way of making feta.

Outside the countries of Europe, you may find feta cheese made from goat’s milk only, and even cow’s milk.

When the curds are all separated, they are shaped into small blocks with the help of molds. The cheese usually remains in the molds for a day so that it holds its shape when taken out.

The cheese is then salted and stored in a wooden or metal container for a day. After this, cheesemakers transfer salted feta cheese into containers filled with brine, a solution of salt and water.

Feta cheese is aged in brine for at least 8 weeks. Some people say that the best feta is aged for a year.

Can You Make Cotija and Feta at Home?

You can surely make both cotija cheese and feta cheese at home. However, know that you will need liquid rennet and calcium chloride. The latter improves the clotting process of the milk.

You will also need a small amount of starter culture. You absolutely need to add starter culture to the milk, as it is essential in transforming it into cheese.

Starter cultures are microbiological organisms that promote the fermentation process of the milk and ultimately create cheese.

If the cheese-making process doesn’t fascinate you, it would certainly be better to buy feta and cotija cheeses, as they are not as easy to make as cottage cheese, for example.

If you do decide to make your own feta cheese, you may want to visit our article on freezing feta cheese to extend its shelf life and keep it fresh for up to 3 months.

As cotija cheese is aged, its texture is rather dry and firm. Feta cheese is also aged. However, as it is kept in a brine solution, feta cheese is soft and crumbly, with a higher moisture content.

Some describe the texture of feta cheese as creamy. When cotija is aged for a shorter period of time, i.e. when it’s younger, its texture is similar to that of feta. Older cotija has a texture similar to parmesan.

Both cotija and feta cheeses are salty. Cotija has a milky flavor, unlike feta cheese that is well-known for its tanginess.

We should note, however, that the longer cotija cheese is aged, the tangier and sharper its flavor gets. Depending on the season of production of cotija cheese, you may experience fruity and buttery notes in it as well.

Neither cotija cheese nor feta cheese melt. This makes them perfect as toppings.

With cotija being a Mexican cheese variety and feta coming from Greece, it is not surprising that these cheeses are staple ingredients in Mexican and Greek cuisines, respectively.

How to Use Cotija Cheese

As cotija is a Mexican cheese variety, it is only natural that you will see it used mostly in Mexican-style dishes.

One thing you should know about cotija cheese is that as it doesn’t melt. You’ll need to add it to the dishes as a topping at the end of the cooking process. Otherwise, the cheese will only dry out.

Here are a few ways you can use cotija cheese:

While cotija is widely popular in Mexican-style cooking, you can certainly use it in your own way. Just keep in mind that cotija doesn’t melt and consider its saltiness when using it as a topping.

In fact, cotija cheese would make a fantastic topping on our recipe for white chicken enchiladas with cream cheese!

How to Use Feta Cheese

When it comes to the number of ways you can eat it, feta cheese has a wider range of uses compared to the Mexican cotija.

Here’s how you can use feta cheese:

You can also bake and grill feta cheese. The cheese is good by itself, drizzled with some olive oil and seasoned. You can also sprinkle the cheese with dried herbs, including dried thyme, rosemary, oregano, and basil.

You can bake the cheese with olives and cherry tomatoes too and serve it with bread as an appetizer.

Can You Substitute Cotija Cheese With Feta?

If you’re looking for a substitute for young cotija cheese that is soft and crumbly, then you can certainly go with feta cheese. One of the benefits of feta cheese is that it is easy to find and there are lots of low-fat options on the market.

With this being said, if you need an alternative for aged cotija cheese, feta cheese won’t do the trick. You will need a cheese variety with a drier texture, such as parmesan or Romano.

Up Next: Migas Vs Chilaquiles – The Important Differences