Home Foodsguy Is Chili A Soup? – The Ultimate Guide To Chili
FoodsguyThis vs That

Is Chili A Soup? – The Ultimate Guide To Chili 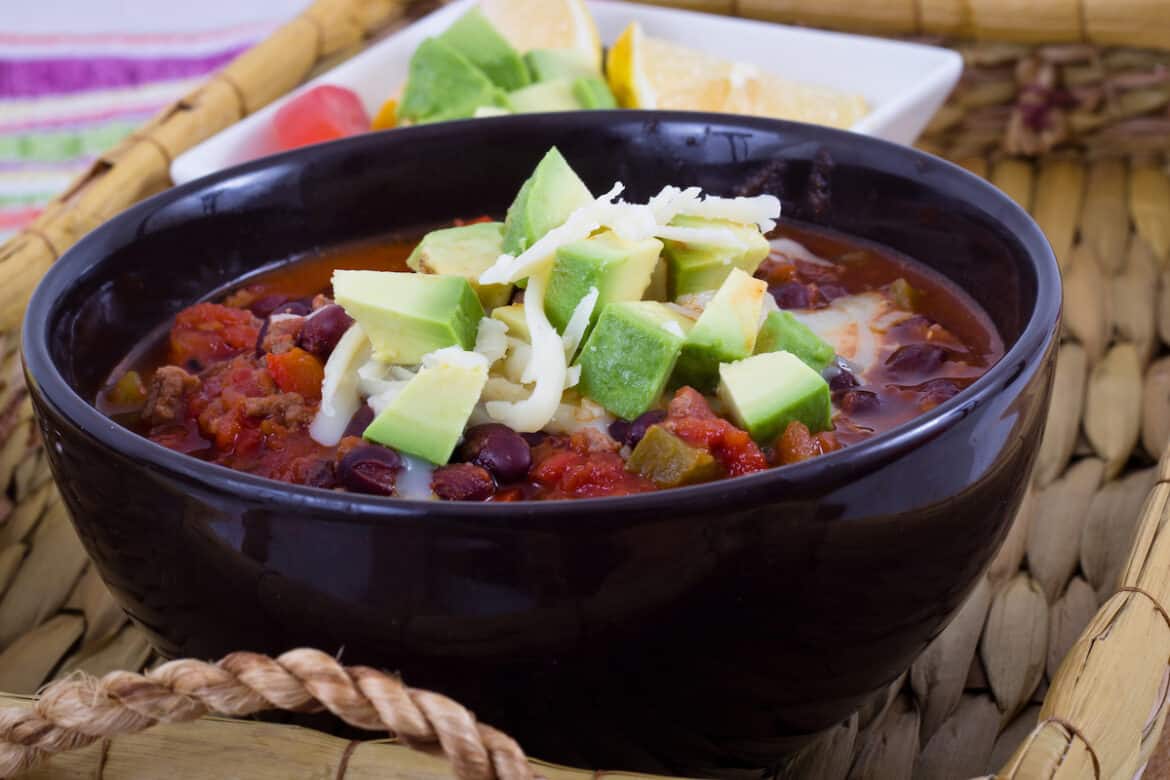 No matter the season, a comforting bowl of chili is always a good idea. Everyone loves it but not everyone knows exactly what kind of food it is and what makes chili a chili.

Is chili a soup? No, chili is not a soup, as it is not liquid-based. Chili should contain enough liquid to give it a consistency of meat and vegetables in a rich and creamy gravy, which makes it more of a stew than a soup. The cooking method as well as how it is served also make chili a stew.

This article is the ultimate guide to chili. If you have any questions regarding chili, you will find the answers here.

What Is Chili and How Is It Made?

Chili is the popular shortened name for the dish called chili con carne, which translates into “chili with meat.“

Chili is a spicy dish made with chili peppers. Depending on how spicy you want it to be, you can use jalapeño, poblano, or serrano peppers.

If you want it really hot, you can also go with habanero peppers. If you don’t have fresh peppers at hand, chili powder or chili paste will do the job.

The main ingredient of this dish is meat. In the majority of cases, ground beef is used. However, you can also make it with pork, chicken, and seafood.

A variety of beans are the most popular addition to homemade chili, though there is a surprisingly aggressive debate over whether or not beans belong in traditional chili.

To make chili, ground beef is cooked separately and added to the rest of the ingredients that have been sautéed in a separate pan.

Once all ingredients are cooked, the meat is added to the mixture of cooked vegetables alongside the liquid. This can be either stock or water, and sometimes cream or milk is added as well.

A small amount of tomato paste is added to balance out the taste and give the dish a beautiful red color. At this point, the dish is seasoned with salt and pepper, cumin, herbs, garlic, etc.

At the end of the day, you make your chili the way you want it. Add whatever ingredients you find work for you. You can also experiment with the spices and add warm flavors to your dish with a dash of cinnamon and ground nutmeg.

There are five common chili variations:

The abovementioned variations represent the broader classification of the chili dish.

If you search for different types of chili, you will learn that different cities or regions have their own take on this dish, such as Cincinnati-style chili or Springfield chili.

Is Chili a Stew or Soup?

Once you have read the description of the chili dish, you may wonder if it is a stew or a soup. As you add liquid to cook the vegetables and meat, doesn’t it make a soup?

To start on a clear note, it is best to begin with definitions.

What is soup? According to the Cambridge Dictionary, soup is “a liquid food made by cooking vegetables and sometimes also meat or fish in water and usually served hot.”

What is stew? The same dictionary defines stew as “a type of food consisting usually of meat or fish and vegetables cooked slowly in a small amount of liquid.”

It may have gotten even more confusing for you, as the cooking process of chili may seem like it fits into both of these similar definitions.

The debate about whether chili is a soup or a stew is so controversial because there are arguments supporting both views.

It should be noted, however, that one side certainly lacks well-grounded arguments. So, let’s settle the matter.

Why Isn’t Chili a Soup?

Some chili variations may be more watery than others. White chili, for example, is said to have a thinner consistency and is soupier and not stewy. If your chili contains a good amount of broth, it will naturally resemble a soup.

Another thing that makes many people think that chili is a soup are restaurant menus and supermarkets. Some restaurants may place chili under the category of soups, and some supermarkets may stock chili alongside other soups and label it as such.

In our opinion, these arguments don’t seem super convincing of the claim that chili is a soup. They could simply be explained as a matter of convenience and human error, or as irrelevant comparisons that exist outside of the definition of soup.

While some chili variations may contain more liquid than others, by no means do they resemble a soup where the ingredients float in the stock.

Why Is Chili a Stew?

Now that we’ve gone over the reasons why chili is not a soup, here is what makes chili a stew.

Chili can be considered a stew, as the meat is cooked before the rest of the ingredients.

When making soups, raw meat can be boiled in stock or water. While the meat cooks, the liquid base acquires a richer flavor.

Stews, as opposed to soups, are cooked longer on low heat until the desired consistency is reached.

Soup is a liquid-based dish.

Stews, on the other hand, are a lot thicker and chunkier. They are like a combination of cooked meat and vegetables and gravy.

The liquid content in chili should not make it too soupy, but also should not leave the ingredients dry.

Soups, in the majority of cases, are served before the main course or as a side. Chili is hearty enough that it is often the main course, just like a stew.

While chili can be served in a bowl as a heartwarming and cozy meal, it can also be served on a plate with some rice or cornbread.

Chili is not as runny as soup, which makes it a great addition to hotdogs, burritos, and nachos. You wouldn’t put chicken noodle soup on a hot dog, would you?

Is Chili Neither Soup nor Stew?

Some might say that chili is neither soup nor stew, and there is no need to try and fit this dish into either of these categories.

People who don’t think that chili is a soup and don’t agree that it is a stew either point out one difference between a stew and chili: stew requires a thickening agent, while chili doesn’t always.

However, it is not in all cases that you need to use a thickener for stew. If you are using products that contain starch, you probably won’t need any thickening agents.

Also, even if it is not included in the recipe, if you make chili and it turns out too thin, it is more than recommended to use a thickening agent such as corn starch or flour to improve the consistency.

So, classifying chili as a stew is quite reasonable.

Chili is made by stewing (cooking slowly in liquid in a covered pan) ground, chopped, or pulled beef. Its consistency is very much the same as the consistency of a well-made stew. It is also served the same way as a stew.

It would be nice to call chili a dish category itself, as it certainly deserves. But if we are going to classify it within existing categories for now, it is more than fitting to call chili a stew.

We hope we’ve satisfied your curiosity with this answer article, but in case there are still more unanswered chili-related questions floating around in your head, we’ve gathered some frequently asked questions below.

Should Chili Be Thick or Soupy?

If you are still not convinced that chili is not a soup, then you’re more than welcome to make it watery. But don’t call it chili if you’re having chili-loving guests over for dinner.

A good chili should be thick and smooth. It should be a hearty, filling dish and a wholesome dinner in and of itself.

What If Your Chili Turns Out Soupy?

Even if you firmly believe that chili is chili, and it shouldn’t be watery, it is still possible that you will end up with a dish that is too liquidy.

You can, of course, let it simmer on low heat and let the excess liquid evaporate, leaving your dish thicker. But doing this may also overcook the ingredients.

Instead, listed below are better ways to fix your thin chili:

What Makes a Perfect Chili?

If you want to master the art of making chili, there are five aspects of this dish you should never fail to perfect.

Up Next: How To Tone Down Spicy Chili

How To Wash Strawberries

What Goes Best With A Pastrami Sandwich?