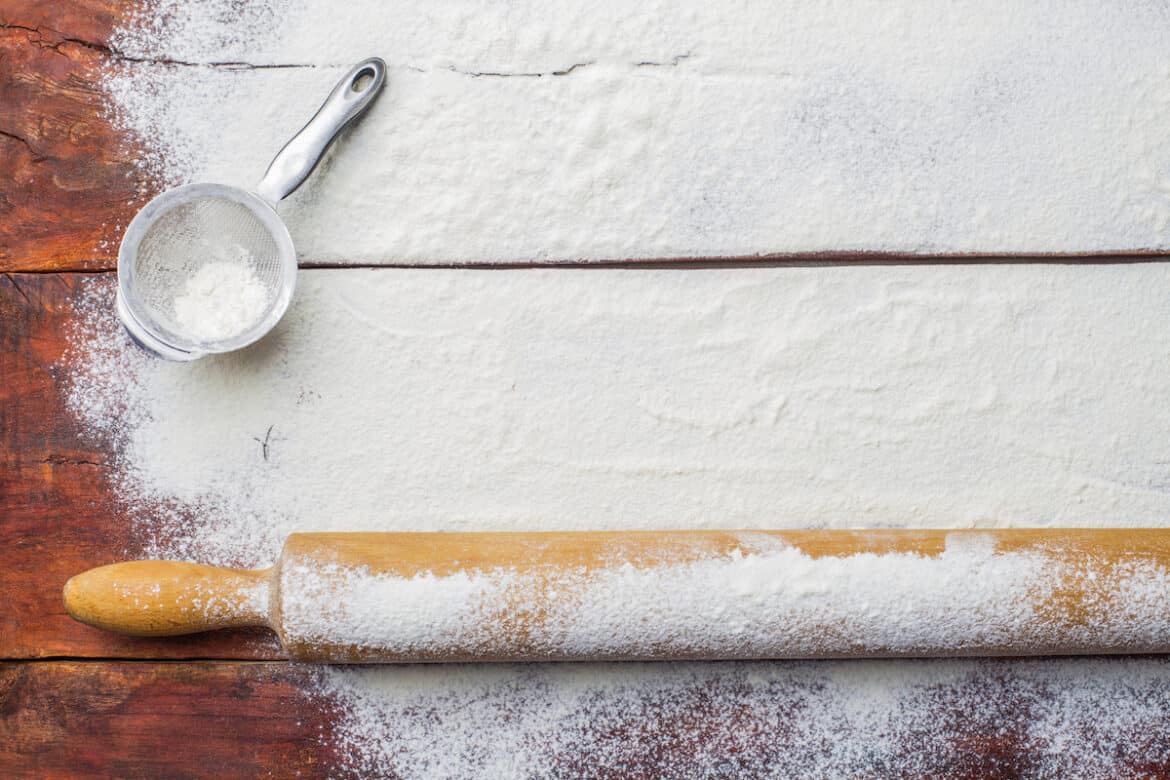 If you’re relatively new to baking, you’ve probably found yourself overwhelmed by the flour selection in the baking aisle at least once.

So, if you’ve ever wondered why you absolutely must have cake flour to bake grandma’s favorite spice cake, but a very different flour for her cherry danishes, this guide will help explain.

Because the differences between flours can be relatively minor, we’ll also talk about some other flour types to provide a clearer example of the differences.

One thing you want to avoid is thinking about cake flour and pastry flour as completely different creations.

That’s because these two flours are highly specialized but ultimately very similar, and you actually can substitute one for the other in several recipes.

Both are very finely milled flours, have a very low protein (gluten) content, and resist the formation of long gluten chains to some extent, making it difficult to use either type of flour for things like pasta or crusty bread.

Both cake flour and pastry flour are designed to help you bake very light kinds of bread. The textures of those breads, cakes, and pastries, are extremely different, in most cases.

However, those differences are as much about the preparation and baking as they are about the type of flour used.

In fact, preparation has a bigger impact on the differences in texture than flour. Keep this in mind as we explain the differences between these two flours, and then explain how other flour types can intersect with cake flour and pastry flour.

There are two basic differences between cake flour and pastry flour: how finely milled the flour is, and how much protein it contains.

Pastry flour is very finely milled. It is significantly finer than all-purpose flours that are designed to tackle a wide variety of jobs.

While you can make pastry with all-purpose flour, it’s likely to have a heavier texture than pastry made with pastry flour.

You might also notice that there is more of a bread-like texture, or a floury texture, than the crisp airy texture of good pastries.

Pastry flour is relatively versatile, but it’s always going to seem softer and airier than a coarser flour, like all-purpose flour or a coarse ground semolina.

Cake flour is even more finely ground. If you feel cake flour with your hand, one of the first things you’ll likely notice is how soft, cool, and pillowy the flour feels in your hand.

You aren’t going to be able to feel individual grains on this flour if you can even find them. The increased surface area of the flour means that it usually feels very cool or even cold, even after sitting out in a warm room.

Those descriptors will also apply to pastry flour, and even to all-purpose flour. But when it comes to cake flour, it’s an order of greater magnitude.

It’s even more finely ground, which means it feels even softer, even cooler, even more pillowy.

Cake flour can also be noticeably harder to work with. It takes a tiny burst of air to blow cake flour all over your kitchen. If you drop a cup of cake flour into a bowl, it’s likely to poof out everywhere.

The same can be said of pastry flour, but it’s marginally easier to work with dry. That’s simply because the individual flour particles are slightly larger and heavier, so they’re less likely to drift away while you’re working.

Protein in flour is what creates elasticity and texture in any baked goods.

That’s why you look for high protein (gluten) content for pasta flours, and why semolina flour is so popular for crusty breads, pizza crusts, and pasta, but not so popular for pie crusts.

Pie crust is a pastry. It’s meant to be light and buttery in most cases, even though it’s a firm and structured pastry.

Made with flour that has a high protein content, pie crusts aren’t as light and flakey. The texture becomes more like shortbread, or, in the worst-case scenario, like a thick cracker.

Pastry flours have a lower protein content. That’s usually because it’s made with cultivars of wheat that are naturally low in protein.

Pastry flour is also usually a white flour, which has additional effects on the flour. We’ll talk about the differences between white flour and whole wheat flour later, since it has a huge impact on what you can expect from your flour.

In flour terms, low protein means that a pastry flour is a very soft flour. Hard flours have higher protein content, which results in firmer or harder finished goods.

Take the same basic batter made with cake flour and made with bread flour. Baked in muffin tins, one will probably be very identifiably cupcakes, while the other batter with probably feel more textured like a muffin, even if the taste is the same.

This is the biggest reason that you don’t want to substitute cake flour for bread or pasta flour, or even for all-purpose flour.

Any recipe that requires kneading is going to be difficult to do with a cake flour, since there isn’t as much protein to create the protein chains. Those protein chains are the basic building block of bread texture.

Other Things To Note

It’s worth exploring some other different types of flour because cake and pastry flours can actually be made with other types of flour.

The difference between whole wheat cake flour and white cake flour, for instance, has a significant impact on your finished product. The same applies to pastry flour.

So, just because you bought cake flour to make a birthday cake, doesn’t mean that your cake flour will produce the same cake you made last year with a different brand.

Every type of wheat is composed of three parts: the endosperm, the bran, and the germ. Whole wheat flour is just flour that has been made from all three. It’s usually a little coarser than white flour, but it can be milled to similar fineness.

Whole wheat flour has more nutrients since it has the added benefit of nutrients stored in the bran and the germ, but it’s also firmer and more protein-rich.

White flour is made using only the endosperm. It’s usually a little finer in texture, more shelf-stable, and less flavorful. It’s also more carb-heavy, so it tastes slightly sweeter.

These two flours hold moisture differently, react in batters and doughs slightly differently, and taste different even when they are made from the same cultivar of wheat.

Bleaching doesn’t refer to color when it comes to flour. While bleached flours are usually lighter colored than unbleached, the bleaching process is more about the other properties of the flour than the color.

Bleaching refers to treating the flour with chlorine or benzoyl peroxide, and occasionally other chemicals.

The treatment damages starches and proteins in the flour. In general, that process makes bleached flours easier to work with. They hold more moisture and rise better than unbleached varieties.

Bleached flours also tend to be slightly more shelf-stable and slightly more consistent than other flours. They can help take some of the guesswork out of baking.

If texture if your ultimate concern, bleached flour is a good option. The same goes for consistency and not being surprised by a strange batch of dough from a normally consistent and predictable recipe.

But if nutrition is your primary concern, or you are concerned about very slight chemical residues, stick to unbleached.

Now you know the main differences between cake flour and pastry flour. Remember, you can trade out cake flour for pastry flour if you want to make a cake, but switching the other way can be trickier.

It’s also important to pay attention to whether your favorite brand is whole wheat or white, and bleached or unbleached. Those details can have a huge effect on your finished baking, even with cake and pastry flours.

You should have a much easier time producing high-quality, consistent, and delicious baked goods now that the flour aisle is a little easier to navigate!

The Best Skillets For Steak