Butternut Squash Vs Pumpkin – The Differences 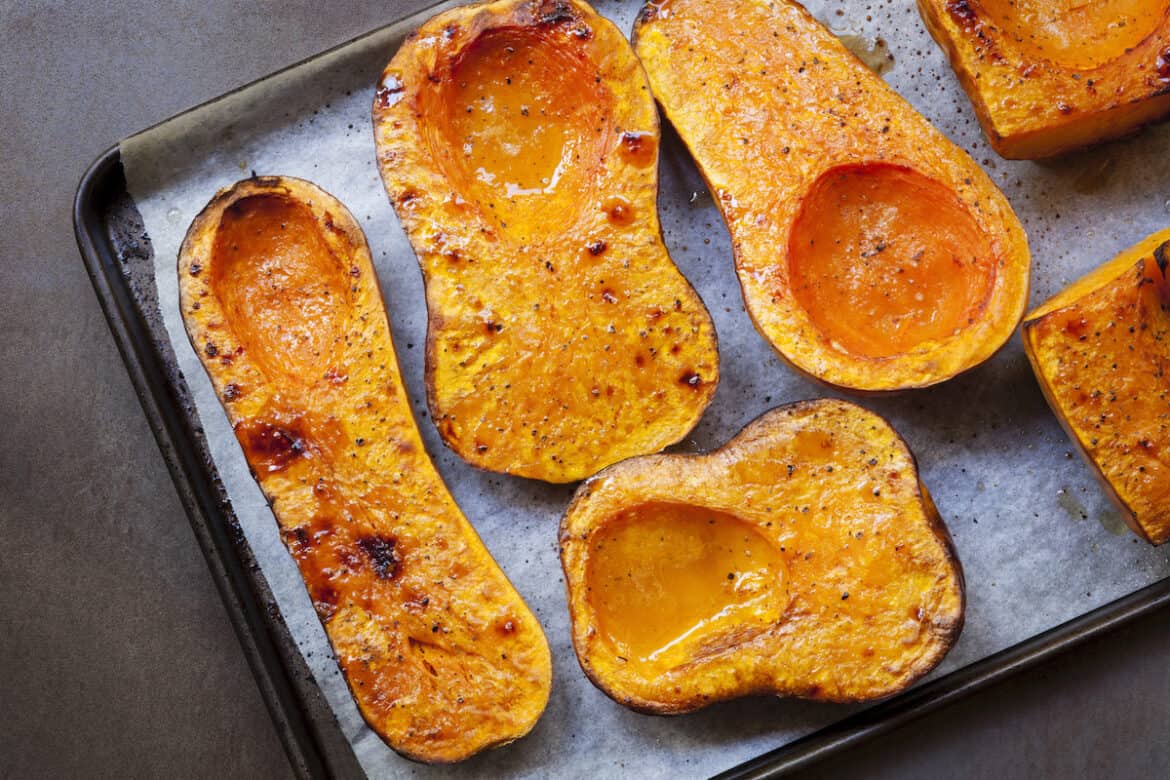 Sweet and yet savory, orange squash. Pumpkin? Or Butternut? It could be either!

So what’s the difference between butternut squash and pumpkin? They are different in shape and size, have slightly different schedules of availability, and have unique nutritional profiles. In some situations, they are cooked and eaten similarly, but there are a few recipes that are specific to one squash or the other.

In this article, we’ll approach the butternut squash vs pumpkin argument from all possible angles and highlight their differences as clearly as possible.

Most people think of squash as a vegetable and, nutritionally, they do have more in common with vegetables, but butternut squash and pumpkins are technically fruits because they both have seeds inside them.

Many people assume a pumpkin is a gourd, rather than a squash, probably because its skin is much harder than the average squash. A gourd, however, is a fruit that is very bitter and usually inedible which, obviously, does not accurately describe pumpkins.

Others ask the question, “Is a pumpkin a melon?” This is a more interesting question because the answer here is yes, but so is butternut squash.

The melon family, Cucurbitaceae, includes gourds, squashes, and fruits we would casually refer to as melons, like honeydew.

Difference Between Squash and Pumpkin Leaves

Not many people realize that you can eat the leaves of squash plants. They’re quite tasty if you like variety in your leafy greens, and they’re highly nutritious as well.

In terms of leafy greens, both young butternut squash leaves and pumpkin leaves are surprisingly sweet and lack the bitterness that large leaves often have (think collard greens).

Butternut squash leaves are large, dark green and heart-shaped. Eat the younger, smaller leaves as the older they get, the tougher they become.

The raw leaves are quite rough, so it’s best to steam them or add them to a stir-fry, rather than a salad.

Pumpkin leaves are very popular in many cultures of the world, but for some reason have been largely ignored in North American cuisine.

There’s a very good chance the reasoning stems from the slight fuzziness or the very stringy fibers that run throughout the large leaves.

If you harvest the leaves when they’re very young, you can chop them up and cook them like most other leafy greens.

If you collect them when they’re older, you’re going to want to pull out as many of the stringy fibers as you can before trying to steam or stirfry them. It’s easier than it sounds, but you’ll just have to try it for yourself.

Depending on where you are in the world, pumpkin might refer specifically to the large, roundish orange squash we carve into Jack-o-Lanterns each year or it may refer to nearly any winter squash, as in Australia.

Pumpkins are almost exclusively harvested in September or October, though they last quite a while, so you may find them in stores into November. You can occasionally also find imported pumpkins, but for the most part, your pumpkin season is highly limited.

Both butternut squash and pumpkin are winter squash, but butternut squash is available year-round. They’re usually sweeter and more nutritious in the winter because they’re harvested locally, rather than being shipped from further away or grown in less natural greenhouse type environments throughout the year.

In nature, when edible foods look similar, you can usually guess they will have similar nutritional components. Orange vegetables tend to be high in beta-carotene, which is true for both pumpkin and butternut squash.

There are some other variations, however, and the chart below identifies a few.

One other interesting factor to consider that isn’t highlighted by the graph above is the ratio of Omega 3 to Omega 6 fatty acids.

In a 100 g serving of butternut squash you get 26 mg of Omega 3 and 16mg of Omega 6. In the same serving size of a pumpkin, you only get 3mg and 2mg respectively. Butternut squash is the clear winner in this department.

When it comes to nutrition, if you’re looking to add the most vitamins to your diet as possible, butternut squash is the vegetable to turn to. However, if you’re trying to minimize calories and carbs specifically, pumpkin is the better choice.

Cooking with Pumpkin and Butternut Squash

If you’ve never cooked a pumpkin before, the first and most important secret is to buy the right pumpkin. Carving pumpkins that come out around Halloween are made for carving. Sugar pumpkins and/or pie pumpkins or even miniature pumpkins are made for eating.

Butternut squash is easier to choose because they’re all perfect for eating, but the best ones are heavy for their size, so pick a few up to compare when shopping.

How to Cook Butternut Squash or Pumpkin

Winter squashes are known for their rather hard exteriors, giving you two basic choices for cooking them:

Our suggestion is to cook it whole. The first option shouldn’t even really be considered an option, but it’s something almost everyone struggles with until someone changes their life by explaining how easy it is to cook squash whole.

Once you’ve made that decision, the best ways to cook a butternut squash or a reasonably sized pumpkin is roasting in the oven, slow-cooking in a crockpot or quick-cooking in the microwave.

When you roast butternut squash or pumpkin whole you’ll be saving yourself a lot of trouble compared to prepping it from raw, but you will be sacrificing some of the caramelized flavors that it develops when roasted already chopped up.

In our opinion, it’s worth the sacrifice, but we’ve got a perfect solution for that too.

Preheat your oven to 425F (375F for pumpkin) and poke a bunch of holes in the squash with a fork or knife. This lets out the steam and helps the cooking process.

Find a baking dish that’s large enough to fit your whole squash and line it with aluminum foil to make clean up a breeze.

Bake for an hour. Add an extra 15 minutes if you’ve got an especially large squash.

If you love that caramelized, burnt butter flavor, bake your squash for 50 minutes, pull it out of the oven, and cut it in half, quarters, or even into rounds.

Use a basting brush to lightly coat the upper side of each piece with extra virgin olive oil and then put it back into the oven for an additional 10 – 15 minutes.

Voila! Best of both worlds – easy as can be and delicious roasted flavor.

How to Slow Cook Whole Pumpkin or Butternut Squash

The only thing you’ll need for cooking your squash whole in a slow cooker is a crockpot that’s large enough to accommodate it. You don’t even need any water.

Place your pumpkin or squash inside your slow cooker, set it to Low, and cook for 6-8 hours.

It will fall in on itself a bit, which is completely fine. This means the outer skin is soft enough to easily slice. Just scoop out the seeds and serve as you like.

How to cook butternut squash or pumpkin in the microwave:

Pumpkin is known very well for two things: carving at Halloween and pie.

Pumpkin pie is such an iconic dessert that it has been turned into its own “spice,” practically giving the entire globe a pumpkin pie aroma for a few months a year.

Butternut squash doesn’t have a dish quite so popular, but it is frequently used in stews, curry dishes, and delightfully creamy soups.

Most whole vegetables have a lot of nutrition that works in favor of weight loss, particularly fiber. This includes starchy vegetables.

However, when you take a vegetable and process it or douse it with a lot of extras like oil, butter, and sugary, salty sauces, you not only lose any benefits, but you also gain a lot of disadvantages.

If you’re counting calories, eat starchy vegetables like beans, potatoes, corn, carrots, and beets in moderation because they have more carbs than fiber.

Completely avoid any version of vegetables that are highly processed and masquerading as health foods, such as French fries or vegetable straws.

Is butternut squash good for dogs?

Butternut squash is good for dogs. For that matter, so is pumpkin and all other squashes.

Just remember, your furry friends do not need any butter, salt, or other extras on their veggies, and to reduce any choking hazards, just give them the flesh, not the seeds or peel.

You can steam or baked butternut squash (or pumpkin) for your pups and serve as is, or blend with some oats and bake them up for treats.

How many pumpkins grow per plant?

If you’re growing your own pumpkins in limited space, like a container garden, for example, it can be very handy to know ahead of time how many pumpkins each plant will yield on average.

A standard pumpkin plant will grow between 2 and 5 pumpkins, depending on the health of the plant and growing conditions. Mini pumpkins will produce many more per plant, up to 12 on average, but they’re tiny by comparison.

Up Next: Spaghetti Squash Vs Pumpkin Squash

Can You Freeze Margarine? – The Complete Guide

Can You Freeze Chickpeas? – Storage Guide