Home Foodsguy Burger Vs Sandwich – What’s The Difference?
FoodsguyThis vs That

Burger Vs Sandwich – What’s The Difference? 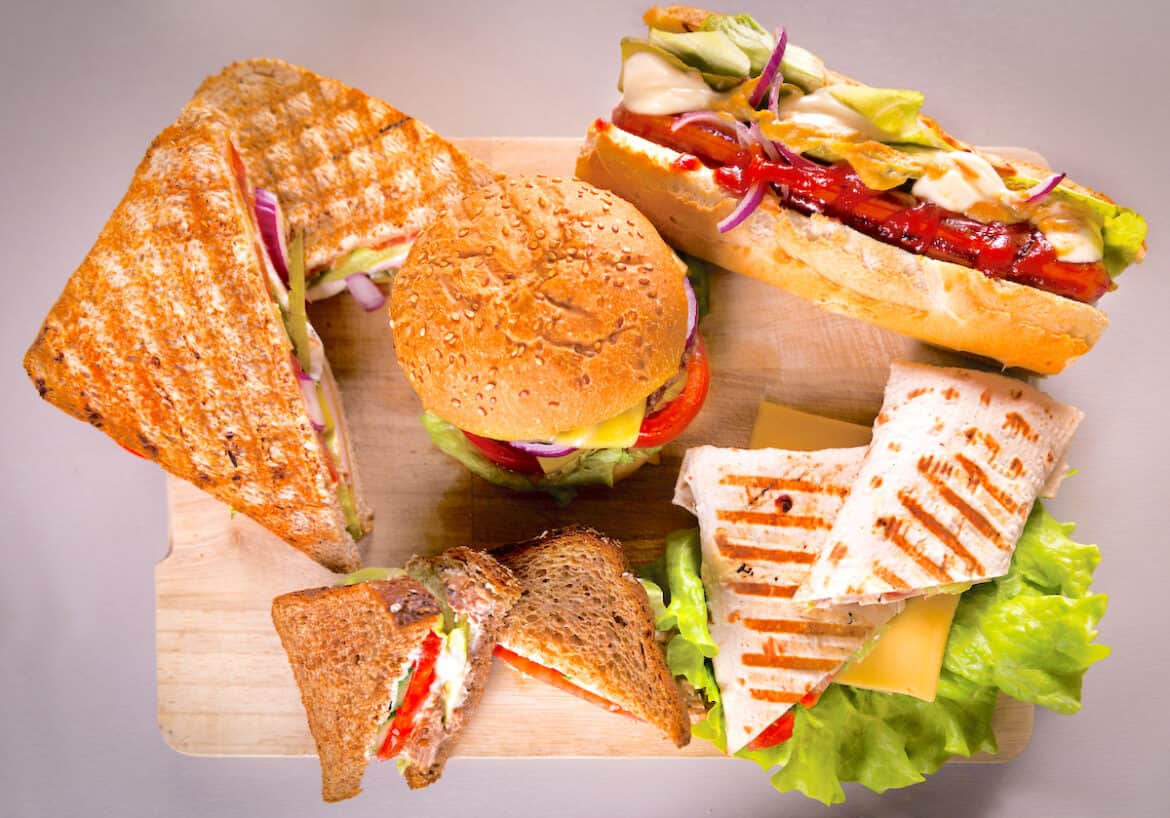 There is nothing like a good old food fact debate. We know we’re not the only ones who have pondered the question of whether a burger and a sandwich are different.

Well, we did some research, and the facts may surprise you. You can make your own final decision.

What’s the difference between a burger and a sandwich? A burger will always have a grilled patty between two circular buns, while a sandwich can have a multitude of different fillings and shapes. However, it could be argued that a burger is a subclass of sandwich.

You may be surprised at just how much thought has been given to the inquiry worldwide.

Until there is a formal decision, you get to decide what you believe, so read on to learn more about the debate and make a more informed decision.

We even attempt to determine whether a chicken sandwich is truly a sandwich and examine the patty melt’s classification.

It’s easy to look at a burger and a sandwich and find differences right off the bat, but it is also easy to identify the similarities.

Ignoring the enjoyment some find in debates like this, it’s hard to argue that, for the sake of simplifying the process of ordering food, burgers and sandwiches are different.

Most Americans would likely agree that the two are in fact different, arguing that in normal interactions, everyone understands the conversational distinctions.

If you tell someone that you are craving either a burger or a sandwich, they will likely make the same distinction that you did. Except, if someone were to ask you for a PB&J sandwich, you probably wouldn’t hand them a tuna melt instead.

So, it can also be argued that even sandwiches have their distinctions, i.e. subs, melts, paninis, etc., and that calling a burger by a different name doesn’t necessarily make it not a sandwich.

The most commonly used, and probably the most solid, piece of evidence on why burgers and sandwiches are different is the way the bread is cut.

This refers to not only how the bread was physically cut, but also to how much of the bread was used. The bread argument states that a sandwich is two pieces of flat sliced bread that are filled with meat and other toppings.

This argument also states that the bread is cut vertically from a loaf, but including that specification ultimately leads to the sub/hoagie/grinder/po’boy dilemma.

The bread argument then goes on to say that the filling for burgers is usually a grilled or seared patty of ground meat and additional toppings that are placed between one whole piece of bread that has been sliced horizontally.

This is where the how-much-of-the-bread-was-used variable comes in, but there are certainly some easy counterarguments to this part as well. What about sandwiches like hoagies which use up the whole bun?

This argument gets muddied even more nowadays, when you may find a burger patty nestled between two donuts, a black bean patty positioned between two pieces of eggplant, or another breadless option.

The truth is that this discussion can get pretty involved. If you look into enough of the information about this topic (as we did) you may even realize that those who claim that a burger is just a type of sandwich, may not be wrong.

There is some solid evidence to support that claim. There is one big similarity between the two that you may think proves the claim that burgers are merely a type of sandwich.

Both of them were invented to solve the same problem; one of them is just much older.

What Is a Sandwich?

Food historians cite that the first sandwich was prepared at the request of the Earl of Sandwich.

He was an 18th-century British noble who requested that his kitchen servants put his meat between bread as a way for him to eat his meat without having to stop card gambling.

Before long, the sandwich was well-known, becoming popular so fast that another noble noted in his diary that he had seen over 30 people eating a sandwich only months after the earl had ordered the creation of the sandwich.

To give you all the facts, there are a few other arguments besides the bread argument that are often made in support of distinguishing a sandwich from a burger.

To recap, the bread argument claims that sandwich bread is typically sliced vertically and is flat, while burger bread is usually a bun or other whole piece of bread that cut in half horizontally.

Other observations about sandwiches that are often used to distinguish them from burgers relate to the variety of filling options and the way the fillings themselves are cut.

The filling argument supports the bread cut argument, noting that bread fillings also tend to be flat and thin. But a smash burger might defy the rules of flatness on this one.

The variety of fillings argument focuses on the fact that a burger typically has a patty made from some form of meat or other ground-up food.

A sandwich can have a much more varied array of fillings, for example, the grilled cheese and PB&J.

What Is a Burger?

The biggest argument that would support the claim that a burger is a specific type of sandwich is that the first burger was not introduced until the late 19th century.

We have to state here that there is more than one claim of someone having invented the burger.

One of the most widely accepted stories is that it was introduced by Louis Lassan, who put cooked ground beef between two slices of bread to make it easier to eat, just like the creation of the sandwich long before that.

Another interesting story goes that a food vendor at a fair in Wisconsin decided to squash a meatball between slices of bread so that fair attendees could eat and still walk around. Not the same as gambling, but the idea is similar.

The other distinction goes back to the fillings argument that claims that a burger is identified by its main filling being a patty of ground-up meat or other food products that is then topped with different vegetables and dressed in condiments.

The answer to that question is, again, up to you. If you go with the simplest description of a piece of meat inside two pieces of bread, then they are both the same.

That description also supports the claim that a burger is a type of sandwich, as burgers were not created until later, with the full knowledge of the existence of sandwiches.

When you start to consider the common differences in how the bread is sliced, how the toppings are layered, and possible toppings like the peanut butter, jelly, and banana, it is easy to see differences. There is also the patty argument.

Of course, we can’t forget the bservation that the majority of Americans know that when someone says they want a burger, you’re most likely not propose going to the neighborhood deli.

The most solid argument, in our opinion, is that burgers have grilled patties of ground food and are almost always circular.

Is a Chicken Sandwich a Burger?

This brings us to the first of two notable food items that blur the lines between the rules we mentioned earlier.

First, let’s look at the chicken sandwich, typically a whole piece of chicken fried or grilled and nestled between what many would say is a burger bun.

The first thing to note is that despite being on a singular bun sliced in half and typically not being evenly flat, everyone still calls it a sandwich.

If you subscribe to the differences introduced by the bread and filling cut argument, the chicken sandwich should be a burger if the chicken has been ground up and turned into a patty.

Unless you happen to eat at a place that likes to use large pieces of sourdough or garlic bread, that piece of chicken is technically on a bun that was cut in half horizontally.

That’s a pretty strong piece of evidence that maybe the chicken sandwich should be called a burger.

But let’s revisit the chicken. Is it a patty of ground chicken that was fried or was it a whole piece that was grilled or deep-fried? A grilled patty may be grounds for calling a chicken sandwich a burger.

The answer to whether a chicken sandwich could be called a burger is probably going to vary from person to person and restaurant to restaurant.

It may even still appear as a chicken sandwich, but in the burger section. There is no true standard or committee to decide this one.

Is a Patty Melt a Burger or a Sandwich?

Now we have another fun example. Patty melts usually appear on the sandwich section of menu, unless the place mostly has burgers, then of course the patty melt is listed with the burgers.

Sometimes it is considered a specialty burger. Most people may not have even thought about it. The confusion arises because the patty melt does not abide by the bread or filling cut rules.

Some would say that a patty melt is a burger patty smashed between two pieces of toasted sandwich bread (and of course the melty cheese). The bread signals sandwich while the patty says burger.

The patty melt feels more like the middle ground between a sandwich and a burger that purists may say borders on sacrilegious.

Up Next: Burger Grill Time Chart – How To Grill Burgers

Can I Use Sourdough Starter Straight From The Fridge?

33 Fruits That Start With B