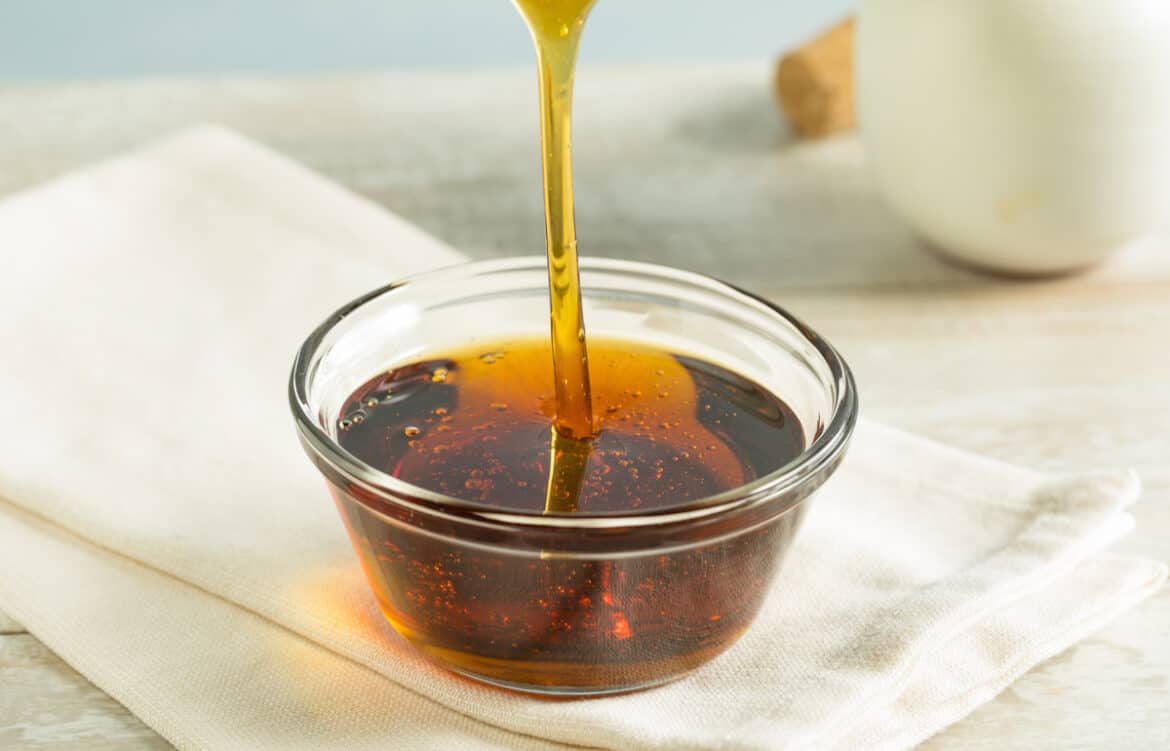 Yacon syrup is made from the yacon root and is used as a sweetener for tea and coffee. The yacon root is naturally sweet and looks very similar to a potato.

Yacon syrup does not contain any additional chemicals and has been to be prebiotic, it also only provides around the third of the calories as the same amount of sugar.

However, there are some significant downsides to using yacon. Some side-effects include diarrhea, nausea, and digestive discomfort. Those with IBS are more likely to suffer from these effects.

If you are looking for a healthier sweetener, but without the nasty side effects, which are the best yacon syrup substitutes? The best substitutes for yacon are agave syrup, molasses, stevia, and maple syrup. These are all-natural sweeteners which are healthier for you than sugar, and each come with their own health benefits, making them unique from each other. Which one you choose will depend on your own diet and health needs, but all make great substitutes for yacon syrup.

Getting to know the different yacon syrup substitutes will help you decide which one is best for you!

These 7 substitutes for yacon are all great options and are all better options than using sugar as a sweetener. Choose from the below list to ensure that you have the best yacon substitute!

1. Agave In The Raw Sweetener

Agave In The Raw is organic nectar, sourced from Mexico’s blue agave plant. The agave does taste 25% sweeter than sugar, so you only need to use a small amount to sweeten your hot drinks or baking.

Agave In The Raw has a low glycemic index, making it a great sugar and yacon alternative. The nectar blends in really easily into beverages, making it a pleasure to use. It is made with only the best ingredients and is organic, kosher, vegan, and gluten-free.

This really is a wonderful option for those who monitor their blood glucose levels, as the low glycemic index will not cause rapid spikes in blood sugar, but you still get to enjoy some sweetness in your tea and coffee!

The Light Agave Sweetener from Now Foods is a versatile sweetener that has a taste very similar to honey. With a mild taste, it is perfect to use in cooking and even better in tea and coffee.

It has a low glycemic index and is certified organic – it is such a great substitute for sugar and yacon, and doesn’t have the side effects that yacon does.

The Light Agave Nectar is made with healthy, natural, and organic ingredients, and is non-GMO, certified organic, kosher, vegetarian, vegan, and gluten-free.

Having a mild flavor means that you can use this agave nectar for so many uses in the kitchen, and not have to worry about glucose or any other negative side-effects that you might get using other sweeteners at home.

Blackstrap molasses is another good substitute for yacon and has a delicious, rich taste to it that many people prefer.

Made from natural ingredients only, you know that you will not be consuming any chemicals or other harmful ingredients.

The Golden Barrel Blackstrap Molasses is made from sugar cane that has not been genetically engineered and contains no additional preservatives.

The wide-mouth, easy-pour jar makes the molasses so easy to use, whether you are adding in a teaspoon to your coffee, or a tablespoon to your baking to add sweetness, some color, and extra moisture.

Much like yacon syrup, molasses has a thick consistency and a dark color, so it is easy enough to substitute the one for the other if you are not too focused on the actual taste. The same consistency means you do not have to adjust too much when using molasses in a recipe in place of yacon syrup.

The rich distinctive flavor is a favorite for some, and there is no better way to enjoy the flavor than through the Golden Barrel Blackstrap Molasses.

The organic unsulfured blackstrap molasses from Viva Doria is such a great product, and for those who enjoy the taste of molasses, it is a great substitute for yacon.

It is a good source of iron and can even be used to supplement iron-deficient diets. Other than this, it contains a good amount of potassium and calcium and is lower in sugar than many other sweeteners.

Blackstrap molasses is the least sweet of the molasses group, but it has the most amount of benefits, making it wonderful for those who are conscious about what they consume!

This zero-calorie sugar substitute is sure to fit into many different diets. It is made from stevia leaf extract, erythritol, and other natural flavors.

One jar of the Truvia Natural Stevia Sweetener contains 80 servings, with a serving being ¾ teaspoon.

Just ¾ of a teaspoon provides the same sweetness as 2 teaspoons of sugar.

However, the stevia sweetener is a gluten-free, sugar-free, certified kosher and suitable for those with diabetes.

It can be used in your coffee or tea, for breakfasts, yogurt, and other recipes. Keep the convenient tub on your countertop ready to be used whenever you need some good sweetness!

6. Stevia In The Raw Sweetener

Stevia In The Raw is a zero-calorie sweetener, made with extracts from the naturally sweet stevia leaf.

Packed in individual sachets, you can measure out your sweetener serving easily, and even carry them around with you so you never have to use other sugars or sweeteners when out.

One packet of the stevia sweetener has the same sweetness as two teaspoons of sugar, and around a teaspoon of yacon, so you can measure out what your tastes are from there.

Containing no calories, this alternative to yacon is a wholesome choice and can be used by the whole family. It is made from only natural, quality ingredients, and is kosher, vegan, and gluten-free.

Using the Stevia In The Raw Sweetener assures you that you and your family are using a wholesome product, with no harsh additives or preservatives that you would want to avoid in other products.

Other than adding the stevia to beverages, you can use it to sweeten up your oats, yogurt, and baking!

The Grade A Maple Syrup from Coombs Family has no artificial flavors, no preservatives, and no dyes. It is organic and as natural as can be!

The maple syrup is kept in a BPA-free plastic jug, while still looking like an authentic maple syrup bottle should! The syrup is made only using health spout taps, and the grading of the syrup ensures you receive only the best.

With a robust, intense taste, you only need a small amount of the maple syrup to sweeten your tea or coffee, alternatively, you can look to use the lighter maple syrup grades to avoid such a rich flavor.

Yacon syrup is made using a similar method to maple syrup, so it is very close to the same consistency, but just with a slightly different flavor. If you love maple syrup, you would probably prefer the traditional taste over that over yacon.

Made from only natural ingredients, you can be assured that you will be giving yourself a great substitute for yacon and that delicious maple flavor that everybody loves!

What is yacon syrup made from?

The resultant product is a sweet-tasting syrup, which has a dark color and a thick consistency.

Yacon syrup has a low glycemic index, which means that it does not spike blood sugar, therefore making it suitable for those who are sensitive to glucose and for those who need to watch what they consume.

Yacon syrup is not processed by our body the way normal sugar is, and it is friendly for a keto diet. It is a low-calorie carbohydrate that tastes like sugar, but which is not metabolized like sugar.

Including yacon syrup in your diet does come with some risks. You might consume a little too much and suffer from side-effects such as diarrhea, gut irritability, and nausea.

Instead of worrying about this, why not switch to a substitute for yacon, such as agave syrup, molasses, stevia, or maple syrup.

These do need to be consumed in moderation, but they are not likely to cause the same side-effects as yacon syrup and are still fairly low in sugar compared to regular refined sugar.

Up Next: Maple Syrup Vs Honey

The Best Tuna For Tuna Salad

The 7 Best Nuts for Salad